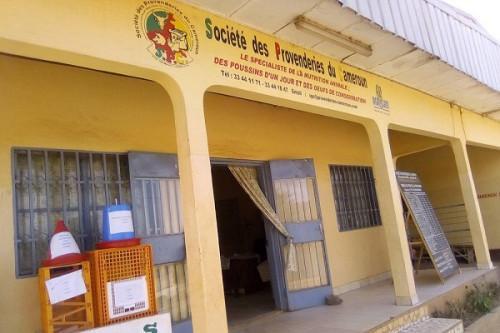 According to Bart Buytaert, director-general of the SPC, the Yaoundé branch will be similar to the Bafoussam plant and will produce feeds for animals, chicken mainly.  “We have noticed that the poultry and pig farming as well as the animal farming industry in general, is booming in Cameroon. The boom is so notable that we have to start relocating our production but also our raw material supply regions, which are the Far North and the East and the Central region, Yaoundé notably. As you know, two-thirds of the corn produced in Cameroon are grown in the North and the Eastern region. So, the transport costs will be high if we stay in Bafoussam, in the West, and source our corn in those producing regions. Some other raw materials like cotton or groundnut cake are also produced in the North and the Central region. Hence the project initiated seven years ago to build a plant in the central region to also support the extension of our sister company Agrocam, which produces day-old chicks for broilers and layers,” Bart Buytaert explains.

In the first phase of the Yaoundé branch whose construction will be completed in H2-2022, the company will produce crumbles and pellets for chicken. In the second phase, the company will start producing fish feeds, which are currently imported by the country. Overall, the Yaoundé plant’s yearly capacity will be 50  to 80 tons for a XAF4 billion investment.

In Nkolmelen, SPC is building a hatching egg production farm initiated by Agrocam, its sister company. On June 29, 2021, during a visit of Minister of Livestock  Dr. Taïga to the farm,  Jean Daniel Ayamapi, CEO of Agrocam, revealed that the plant will include 12 buildings hosting 120 breeders.  “The aim is to produce 20 million hatching eggs. The farm is necessary because, in the past, we have had difficulties in sourcing eggs to fill the needs of our hatcheries in Yaoundé and Douala. Our current production is not up to our needs. So, we deemed it necessary to make new investments to boost our local production capacity,” he said.

He added that Nkolmelen, which is closer to Obala, was not chosen by chance to host the farm. It is located just kilometers from Yaoundé where the company has a hatchery.

“The logistics costs will be higher if we were to produce the hatching eggs far from the hatcheries, due to transport cost. The cost incurred would undisputably impact retail prices. Can you imagine how much savings will be made if 20,000 hatching eggs were produced locally instead of importing them? We will save close to €4 million (ed. note: XAF2.1 billion),” he added.

According to Agrocam, the first three buildings (spanning over 13 hectares) of the Nkolmelen farm will be completed in November 2021 and the overall investment for the farm is XAF1 billion.

SPC was founded by late business mogul Jean Samuel Noutchogouin. In 2020, the company produced 55,000 tons of animal feeds. It claims 25% of the national livestock feed market. As for its sister company Agrocam, it claims 75% of the local day-old chick market. Every year, it supplies 25,000 day-old chicks to the local market while Belgocam (another SPC sister company) imports and sells farm inputs.