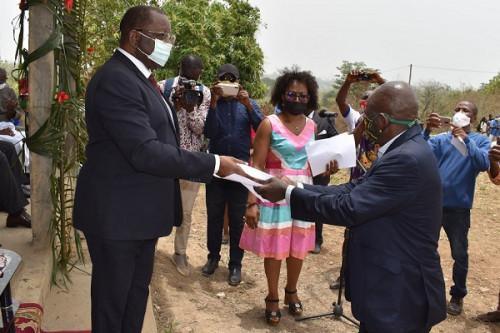 (Business in Cameroon) - In Cameroon, the government will release XAF2 billion to reward farmers who produced premium cocoa over the 2018/2019 and 2019/2020 cocoa seasons. This was revealed by the Minister of Commerce Luc Magloire Mbarga Atangana, during a press briefing held in Yaoundé, on February 4, 2022. This means that on average, XAF1 billion will be used to reward premium cocoa producers for each of the two seasons. This represents a 29.2% increase compared to the XAF774.025 million paid by the government for the same purpose in 2021 for the 2017/2018 campaign.

"The cocoa quality premium aims to encourage producers to market high-quality cocoa and further enhance the value of group sales to improve their income and incidentally enhance the image international buyers have for the cocoa produced in Cameroon," the government official said.

According to Luc Magloire Mbarga Atangana, from February 7 to March 11, 2022, producers will have to submit their applications to the departmental delegations of the Ministry of Commerce and agencies of the National Cocoa and Coffee Board (NCB). Producer organizations will have to provide the sales documents from the grouped markets where the sales occurred and the sales slip, per the provisions of the text organizing cocoa marketing.

In 2021, XAF774.025  million was distributed to 5,239 beneficiaries for the 2017-2018 cocoa season. This premium was decided by the government in 2017, following the decline of cocoa prices worldwide. The premium aims to provide an additional income stream to farmers and encourage the production of Grade I cocoa.