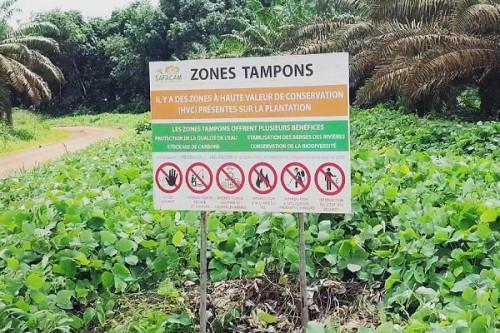 (Business in Cameroon) - On July 1, 2021, through the SYNAPRARCAM- the national federation of Cameroonian farmers and local communities, local communities surrounding SAFACAM’s plantations initiated protests against the RSPO certification the group obtained in late 2020.

The RPSO certification system takes into account the environmental and social environment in which groups seeking the certification are evolving. Community leader Michel Essonga believes that it is hard to imagine how SAFACAM could have obtained such certification without even changing its planting practices.

SAFACAM “is far from being a responsible company. It violates our land rights and pollutes our rivers and streams. People are feeling intimidated and harassed. Why have the auditors not taken our grievances into account? Now, we have no other choice than to request the withdrawal of that certification,” Michel Essonga said.

The grieving communities indicate that the certification should be withdrawn for several reasons. First, the public consultation announcement in the framework of the certification was not announced in the appropriate language. Hence the concerned communities and sub-groups were not present. Worse, some parties were not invited, particularly those with critical views on the group’s operations. Such a situation is against the RSPO certification requirement, which is to take into account all of the relevant information and views of stakeholders while assessing companies’ compliance with the RSPO standards.

For Samuel Nguiffo, secretary-general of the Cameroonian NGO Center for Environment and Development, “RPSO and the certification body SCS are setting a regrettable precedent and making it look like there is no need to adopt social and environmental standards before getting an RSPO certification.”

“The certification system has seriously lost credibility in Cameroon,” he added.

The fairness of the audit process questioned

The SYNAPARCAM reveals that many civil society organizations have filed complaints against the failed certification process that led to the two decisions to certify companies with controversial operations in Cameroon and Côte d’Ivoire. The first complaint was submitted to the certification body  SCS Global Services (SCS) in November 2020 and the second submitted to accreditation organization Assurance services international in June 2021.

“The various land disputes extensively described by the communities were not reviewed by the SCS auditors, Those land disputes, as well as several other complaints, were not incorporated into the SCS summary public audit report. Communities, therefore, questioned the independence of the audit mission. In light of some specific complaints accusing the auditor, a community even declined to meet the audit team. At least two members of the community complained about SAFACAM’s intimidations in the framework of that audit. The audit mission was unable to guarantee confidentiality and a safe place for the meeting. There are also questions concerning why only part of SAFACAM’s plantations was audited by the SCS,” the SYNAPARCAM writes.

Since late June 2021, Business in Cameroon has contacted SAFACAM to get its responses to those accusations but the agribusiness group has remained silent. Its plantations are the results of a long large-scale agricultural development process launched in 1897 when Cameroon was under the German protectorate. Currently, the plantations are located in Dizangué and Mouanko, in Litoral Cameroon.