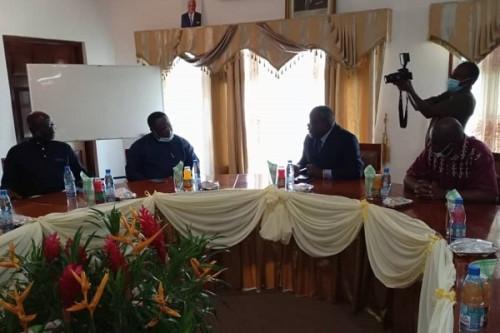 According to Alhassan Haruna, through the memorandum, GMC is committing to providing funds to boost CDC’s investments in another segment: cassava namely. The new segment will be profitable “in Cameroon because the country is in what the African Union calls a cassava belt,” he explained.

“Two species will be produced. One will be designed for local demand and the other for exports. We will need close to 10,000 hectares of land to build two plants,” added Olivier Nanan Kablan, CEO of GMC Universal Ghana Ltd.

Franklin Ngoni Njie indicated that CDC would provide the lands needed (since the state firm has several registered but not yet developed lands).

After the signing of the memorandum (renewable every one year), the GMC Universal met Prime Minister Joseph Dion Ngute and the Minister of Agriculture on two different occasions on December 9. During the meeting with the government officials, the group indicated that it could return to Cameroon in the next six months with a specific funding plan to materialize the partnership with CDC.

The Prime Minister reassured his hosts, promising the government will roll out the necessary measures to guarantee security for their operations in the Southwest. As for the Minister of Agriculture, he praised the initiative indicating that it would reduce Cameroon’s reliance on imports for flour or wheat needs.

Since the onset of the security crisis in the Northwest and Southwest, CDC’s operations are dwindling. In 2019 and 2020, in recorded over XF18 billion loss, according to figures from the Ministry of Finance.

An investor like GMC Universal is thus a notable asset for CDC because it has already implemented a similar project in Ghana. In 2018, it obtained US$25 million from Indian firm Cosmos International to install and operate a cassava starch processing plant in the Volta Region, Ghana.