South-West: 55 modern dryers to be installed to improve cocoa quality 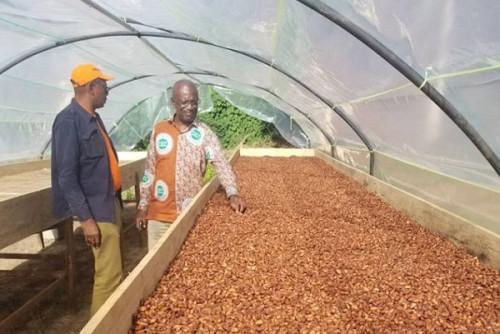 (Business in Cameroon) - Fifty-five cocoa drying machines will be installed in South-West Cameroon, one of the main cocoa production areas in the country. In that regard, Besong Ntui Ogork, coordinator of the Agricultural Infrastructure and Value Chain Development Project, recently issued a call to recruit service providers interested in the project.

They are allowed up to March 17, 2022, to submit their applications. According to the project coordinator, the drying machines will be installed in Fako, Meme, Kupe Manengouba, Manyu, and Ndian. Once completed, the machines will be backed up with cocoa fermenters. The project aims at improving the quality of cocoa beans sold in the region. Indeed, in the region, cocoa is harvested during the rainy season and producers usually dry their beans using traditional dryers placed over a fire. This drying method usually gives a smoked aroma to the beans and an inadequate humidity level.

Due to the inappropriate aroma and humidity levels, international buyers offer discounted prices for Cameroonian cocoa. For instance, in 2017, a XAF200 discount was applied on the cocoa beans from Cameroon due to their “low quality”.

In 2013, the national association of coffee and cocoa producers revealed that 2,000 tons of Cameroonian cocoa were returned from European ports due to their smoky aroma. This caused a close to XAF3 billion loss for the exporter who bought those cocoa beans from farmers.

Besides the traditional drying method, some farmers’ practice of drying their cocoa on bare pavements is also detrimental to the perception international buyers have of the cocoa from Cameroon. Indeed, the cocoa dried on bare pavements are sometimes contaminated with polycyclic aromatic hydrocarbon, a toxin prohibited in the European Union since January 1, 2013. Hence the importance of the drying machines to be installed in the South-West.