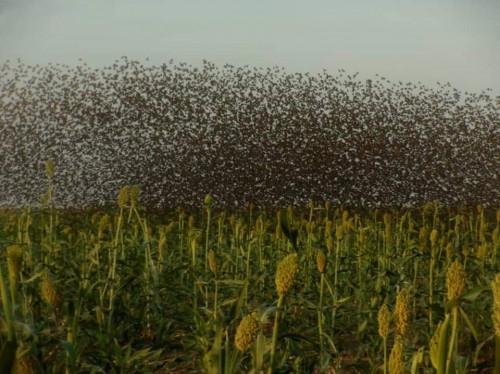 (Business in Cameroon) - For several weeks now, grain fields have been under the attack of granivorous birds in the Logone et Chari and Mayo Tsanaga departments in the Far-North, regional triweekly L'œil du Sahel reports. According to initial estimates, some 1,500 hectares of millet and sorghum plantations have already been attacked by the birds, raising the specter of hunger in those regions, which are high cereal consumers.

"The birds have their nests either inside the Waza National Park or in the red zone on the Nigerian side. (...) When sorghum enters its milk stage, it becomes their preferred food. So, there is a need for action. If not, they can destroy the whole production," explains an official from the Ministry of  Agriculture.

Pending a global response to those field destroyers, farmers currently wake up early to protect their field by chasing the birds. "The birds invade fields as early as 4 a.m. to eat the millet. We are obliged to rush to fields with our children before that time with the hope that we can protect the remaining millet till its maturity. Currently, We have given up on our day jobs to focus only on protecting our sorghum," added Zra, a farmer interviewed by L'œil du Sahel.

In the Far North, the climate is not conducive to high agricultural yields. Yet, besides the granivorous birds, elephants also regularly destroy cereal fields causing cereal production deficits.

The hunger specter waged on residents by those attacks has been strengthened in recent years with the arrival of refugees who require additional food and Boko Haram attacks that forced farmers to abandon some fields. The threat is nevertheless mitigated by the National Cereals Board, a state institution that regulates supplies during challenging times.