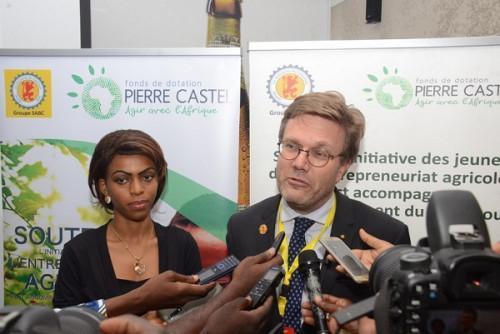 (Business in Cameroon) - On March 1, 2021, the Pierre Castel endowment fund, “Agir avec l'Afrique” (Act with Africa) opened registrations for the fourth edition of the Pierre Castel Prize, which rewards agricultural or agri-food projects carried out by young Africans (18-45 years). Young Cameroonian entrepreneurs have until March 31, 2021, to succeed Delors Leuwing Ngounouo who won the third national edition in 2020 thanks to his company Mboa Snackery Sarl which produces and sells plantain chips.

The candidate ranked first will win a €15,000 (XAF10 million) prize, sponsorship, and coaching for the selected project as well as a 1-year training. The second prize will include €5,000 (over XAF3 million), coaching, and a 1-year training.

Unlike in the previous edition where only the first and second winners were awarded, this edition will reward the 3rd to 6th candidates as well. They will receive certifying E-course with the International Trade Centre in Geneva, Switzerland, we learn.

The initiative has been launched in Cameroon, Burkina Faso, DR Congo, and Côte d'Ivoire to provide financial and technical assistance for projects led by young African entrepreneurs in agriculture, agribusiness, agritech, and agro-resources presented as high value-added sectors that could significantly reduce poverty on the continent.

In addition to this support for young entrepreneurs, in Cameroon, the Pierre Castel Fund recently signed an agreement with the Ministry of Higher Education to finance a Pierre Castel Chair at the University of Dschang (where there is a faculty of agronomic sciences), to promote agricultural innovation and adaptation to climate change.