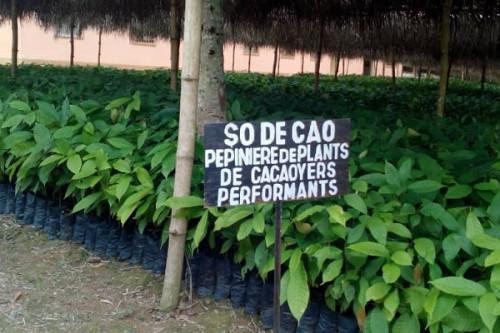 (Business in Cameroon) - The Cocoa Development Company (SODECAO) is currently planning the distribution of 4 million high-yield cocoa seedlings, official sources reveal. The sources add that those seedlings can produce 1,000 to 2,000 kilograms of cocoa per hectare and are resistant to insect attacks that usually destroy plantations.

The distribution of the seedlings will help regenerate aging plantations or even facilitate the creation of new cocoa plantations in the country's production areas. That way, within two years, the national production will rise to meet increasing demand from the processors that recently entered the national market (Atlantic Cocoa and Neo Industry).

Cocoa is a cash crop that generates revenues for producers and fills the country’s foreign reserve. According to the 2019 report on Cameroon’s foreign trades, cocoa was the country’s 2nd export product in 2019. That year, Cameroon’s brick-red cocoa beans, which is highly prized by chocolate makers, brought in 12.1% of the country's export earnings.