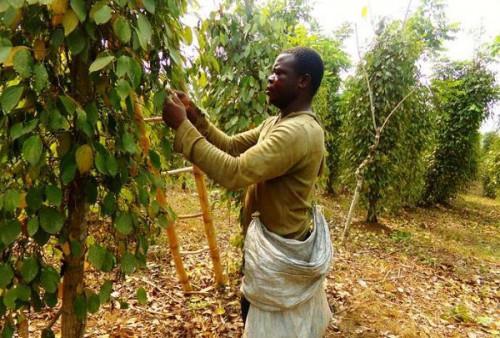 (Business in Cameroon) - In 2018, Plantations du Haut Penja (PHP), Cameroonian subsidiary of Compagnie fruitière de Marseille, harvested only 12 tons of Penja Pepper, far below the 40 tons harvested some years ago. According to Jules Kamdem, Penja pepper production’s manager at PHP, this production drop is the consequence of the reduction of cultivable areas because of biological pests.

Those pests notably destroy the plants’ roots. “If nothing is done to combat those fungi, there will be no future for Penja pepper. For the time being, experts simply advised us to relocate our plantations,” Jules Kamdem explains.

Official sources reveal that PHP’s former pepper production farms have been converted into banana farms because of the pests. Therefore, the group’s pepper production areas dropped from 40 to 21 hectares, Jules Kamdem indicates.

“You sure have noticed that since its labelling, there has been a Penja pepper rush. However, production is not following through. This is due to the fungi that destroy our pepper plants. Researchers must move to the site to find a solution for these biological pests,” he adds.

Our sources reveal that in 2018, the French Development Agency funded a research programme to avoid the danger threatening the survival of Penja pepper. It is also worth reminding that it is that same development agency that helped label the product.

Thanks to the labelling, the price per kilogram of Penja pepper, a spice liked by best cooks around the world, rose from XAF2,500 to XAF14,000. Because of biological pests that are developing in Penja, producers are not yet reaping the rewards of this labelling.