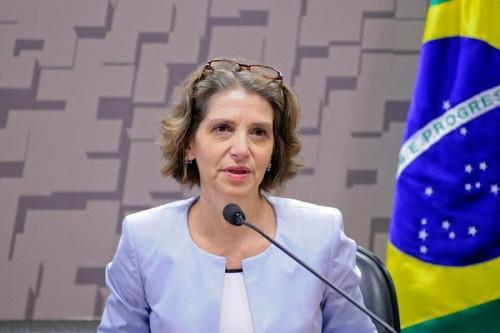 (Business in Cameroon) - Brazil’s ambassador to Cameroon explores opportunities for a win-win cooperation between the two countries, especially related to agribusiness development.

Vivian Loss Sanmartin: We picked this sector because Cameroon’s economy strongly depends on agriculture which is the country’s largest employer. The other reason that motivated our choice is that agricultural modernization has, for some years now, been a major concern for the Cameroonian government. Moreover, given Brazil’s strong agricultural tradition, we believe that we have a lot to offer Cameroon in this sector. Our countries also share some similarities, such as climate and the type of soils. There are therefore great opportunities for experience-sharing, ultimately contributing to the growth of Cameroonian agriculture.

BC: What can Brazil concretely offer Cameroon and how can it help it develop its agricultural sector?

VLS: Well, we can, for example, offer expertise by letting our consultants assist farmers in improving their yield and output quality. We can also help Cameroon and its farmers migrate toward a well-performing agriculture, from one that performs very little now. To do this, we will leverage technologies developed in Brazil but adapted to tropical soils and weathers, the same as ours. We already have a Brazilian firm, IBSS Agronomy, established here in Cameroon doing this with agricultural entrepreneurs. This company provides its expertise to improve agricultural yield and quality of products.

BC: In your opinion, one of the secrets behind the development of agribusiness in Brazil is EMBRAPA. This is a research institute created in the 70s. Looking at the research component of the Brazil-Cameroon cooperation, what progress has been made so far in this area?

VLS: At the moment we have no such project. However, in the past, we had some but they were minor. A few years back, EMBRAPA and Cameroon’s Agricultural Research Institute for Development (IRAD) signed a memorandum of understanding to identify cooperation channels, for example, to empower Cameroonian technicians, in Brazil. We believe this can be done. Most importantly, there is an opportunity to spur exchanges, especially concerning the private sector’s contribution to the application of technologies already developed in Brazil, here in Cameroon. After all, there is no use for research if its results cannot be appropriated by the private sector.

BC: Well, one of the issues with research in Cameroon is that its results are not well disseminated and the private sector does not, or hardly cares about them. How can Brazil help Cameroon reverse this trend?

VLS: EMBRAPA’s expert has presented researches conducted by the institution which allowed Brazilian farmers to advance agriculture in the country. In the past, farming was done mainly in Southern Brazil where the climate is temperate. Farmers later moved to the Central West where biomes are similar to the African savanna but before these researches, people did not know farming could be done in that part of the country. However, using relevant technologies, soil acidity was corrected, erosion could be prevented and two, and even three crops could be grown during the same season. Hence, areas which were once only degraded rangelands were turned into high-yield farmlands. Overall, we can show Cameroonians that they can migrate to modern agriculture by using technologies developed in Brazil.

BC: What Cameroonian agricultural products does Brazil want to help the country develop through its expertise?

VLS: We have cassava for example which Brazil knows very well. There are also maize, soybeans, and fruits which we can help Cameroon better produce. Some of these commodities, like soybeans and maize, can also help develop husbandry since they serve as base products in animal feeding.

BC: Besides sharing of experience, wouldn’t it be more interesting to encourage Brazilian agribusiness actors to open branches here in Cameroon?

VLS: That could be done in the future. Some Brazilian economic operators are interested in Cameroon. However, some key conditions must be met before they come into the market. With growing trade between the two countries, we believe this will happen soon. In Cameroon, we can have a good harvest as well as access to both the local and regional (Central Africa) markets. With Brazil, Cameroon can have a win-win cooperation.

BC: Brazil is a major producer of sugar and coffee, two commodities whose output is at times insufficient and others drastically falling in Cameroon. How can Brazil help Cameroon cope or revert this situation in these two sectors?

VLS: The history of sugarcane in Brazil is quite interesting. We use it not only as food but also as a biofuel. In our country, all vehicles operate with about 25% of sugarcane-based ethanol mixed with fuel. So, it is possible to make not only sugar with it but alcohol as well which can be used locally and exported even. The same could be done in Cameroon. The same goes for coffee. In Cameroon, I think what should be done first is to boost local consumption and improve the beans’ quality. Cameroonians must consume more coffee. It is very important if the country wants to attract more investors in this sector. In the past years, Cameroon’s coffee output has significantly reduced, but before it attracts investments, the beans should be of good quality and the local market should be attractive.

BC: Besides agribusiness, what other economic sectors are likely to interest Brazilian investors in Cameroon?

VLS: There are many. For example, there is the infrastructure sector. Brazil is one of the leading countries when it comes to renewable energies. We have many companies that are active in the construction of dams and power production. We also have innovative solutions to achieve decentralized energy production, such as production from sugar cane bagasse, biogas, among others. Brazil also has expertise relative to transport and urban mobility. We have Embraer which is an aircraft-manufacturing company. In addition to those, we have surveillance systems that could be used by the military and security forces. In short, there are many sectors in which Brazil can provide Cameroon its expertise.

BC: Cameroon’s public airline Camair Co currently leased one of Embraer’s planes. Should we expect more planes from the Brazilian manufacturer to follow, not under leasing but a definitive transaction?

VLS: Yes, of course. These are excellent planes, with a size well-adapted to local needs, but also with a worldwide-proven performance. I should also mention Embraer Defense, a branch of the company that makes planes for the military, security forces and civil defense organizations. Such planes include the Super Tucanos which are already used by some African countries. There is also the KC-390 which was just launched. It is a military transport aircraft (troops and equipment), which can serve for air-to-air refueling, search and rescue operations, and aerial firefighting.