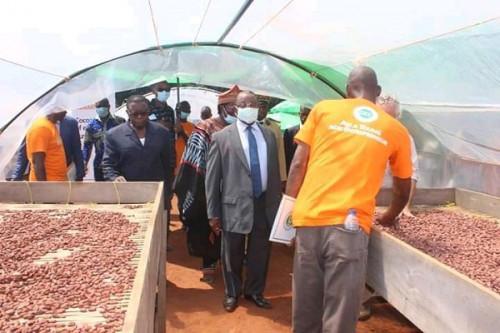 (Business in Cameroon) - Cameroon’s sixth cocoa Post-Harvest Treatment Centre of Excellence is scheduled to be inaugurated today October 22, 2020, in Ntui (a cocoa producing area in the Central region).

According to the national coffee and cocoa board (which is building the centers in the framework of the project "cocoa of excellence" implemented in collaboration with French master chocolatiers), three additional centers of excellence will be built in the country in 2021.

They will all be located in the central region ( Ngoro, Nkondjock, and Minkama namely), which has become the most important cocoa-producing region in Cameroon because of the separatist crisis that started in the anglophone regions in October 2016.

The excellence centers are post-harvest centers equipped with specific fermentation, drying, and storage equipment as well as a strict cocoa quality controlling system, which helps produce cocoa with virtually zero-defect.

The cocoa produced in these centers is bought at a substantially higher price. For instance, during the 2019-2020 cocoa season, the first 150 tons of cocoa produced by those centers were sold to French master chocolatiers at XAF1,650 per kilogram while the ordinary cocoa beans were sold at about XAF1,300.

For the 2020-2021 campaign, "Club des chocolatiers engagés" (an association of master chocolatiers, which was initially constituted of French masters but now counts Belgian and soon Swiss members) has already promised that the price per kilogram of cocoa from the centers would be XAF1,640.