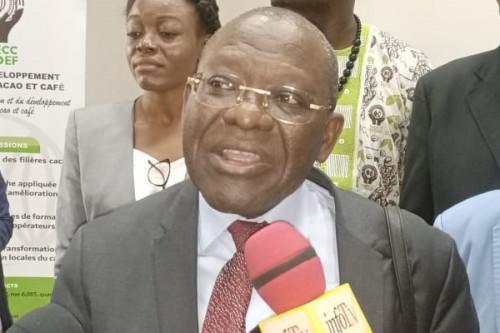 (Business in Cameroon) - The Cocoa and Coffee Development Fund (Fodecc) announced the distribution of CFA1.2 billion of inputs to producers in Cameroon. The Fund Director, Samuel Donatien Nengue (pictured) said during a press conference yesterday that the initiative, which begins tomorrow, will benefit 500 producers. This is phase I of a vast program (CFA6.3 billion) dedicated to producers. The launching ceremony will take place in the production basin in Melong, in the Littoral.

“The development of this producer-oriented program is based on a database of cocoa and coffee producers in Cameroon. The database contains information on the identity of producers, the location and coverage of plantations, the age of plants, etc.," Samuel Donatien Nengue explained, stressing that to get a chance to receive financing, producers must first have a smartphone and download the Producer Counters app (Agri4 Farmer) via Google Playstore. The application allows them to carry out all transactions online, including registration, obtaining subsidies, geolocation of plantation, and ordering inputs.

The program is open to all producers provided that they can co-finance the investment and use digital technology. The producer is the one who catalyzes the input acquisition process by raising his majority share from 60 to 70%. Fodecc then releases for each producer the amount of the subsidy up to 30 to 40%. Another condition is that the bank account must have an amount equal to or greater than the amount of the e-voucher requested for the acquisition of inputs from a local distributor.

Fodecc focuses on three types of subsidies divided into two main categories. The first concerns mass subsidies for agricultural inputs (fertilizers, seeds, seedlings, and plant protection products). This category is open to all and includes about 600,000 producers with areas ranging from 200 m2 to 10 hectares, according to official figures.

Categories 2 and 3 cover agricultural equipment and machinery, as well as production support infrastructure. These are tailored subsidies that require meeting certain criteria, including the development of a business plan. The government seeks to increase national cocoa production to 640,000 tons by 2030, up from 257,151 tons in the 2019-2020 season. As for coffee, the targeted production is 160,000 tons against 22,000 tons currently.