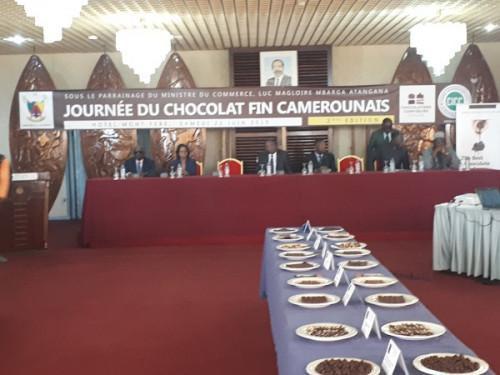 (Business in Cameroon) - On June 22, 2019, the hall of Mont Fébé hotel in Yaoundé, Cameroon, was converted into a mini chocolate factory. It was in the framework of a ceremony baptized " journée du chocolat fin camerounais" (the day of premium Cameroonian chocolate). Organized by the country’s coffee-cocoa board and the association of French chocolate makers, this event was under the patronage of Cameroon’s government via the ministry of trade.

During the event, the processing procedure of cocoa beans, from excellence centers, was presented. The chocolate making process was also presented and various chocolates produced with Cameroonian cocoa were tasted.

This partnership was initially a "marriage of interests," Cameroon’s trade minister Luc Magloire Mbarga Atangana indicated. It then became a "marriage of convenience," the official continued. "We were convinced but, after this tasting session, we are impressed. After what we have seen, we are tempted to ask when the chocolate industry will be moved to Cameroon,” he concluded.

According to the minister, even though the partnership between local cocoa producers and French chocolate makers has increased cocoa growers’ revenues, local chocolate production by French makers would be beneficial for the sector. This delocalization will create jobs, facilitate the transfer of expertise and provide a plus-value in the whole economy.