A rice shortage is highly unlikely in Cameroon till end-2021, the MINCOMMERCE assures 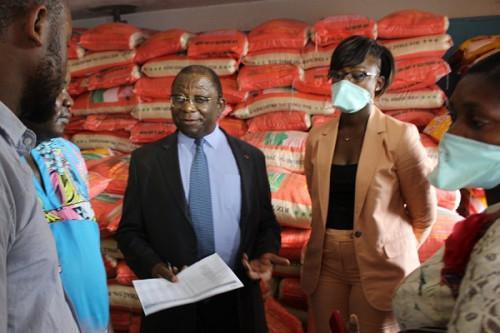 (Business in Cameroon) - Cameroonians should rest assured there will be no shortage of rice, one of the most consumed food products in the country. This is the message of the release signed on June 24, 2021, by Minister of Commerce Luc Magloire Mbarga Atangana.  "In the aftermath of the unjustified hullabaloo and media fuss about the issue of rice prices in recent weeks, the Minister of Commerce (…) is honored to inform the general public that the shortage risks" described by some people are just fantasies.

According to the official, the stock of rice currently available on Cameroonian territory is estimated at 200,000 tons, which is enough to meet four months of local demand (July to October 2021).  The release adds that there are also 100,000 tons of rice at bay, which is enough to cover two months of local demand. This means that coupled with the 200,000 tons stock, there is enough rice to meet local demand till the end of the year, although the Minister’s accounts do not include the orders not yet delivered by foreign suppliers.

This release is an answer to the press briefing organized on June 17, 2021, in Yaoundé, by the Cameroonian Rice Importers Association (GIRC). During the press briefing, Jacquis Kemleu, general secretary of the GIRC, pointed out the difficulties faced by rice importers due to administrative problems caused by the new foreign exchange regulation. Indeed, the new regulation introduced tougher controls (denounced by economic indicators) over wire transfers.

Besides denouncing the administrative problems caused by the foreign exchange regulation, Jacquis Kemleu added that the country had a stock of 200,000 tons of rice. However, he mentioned, the stock was not enough to meet the short-term local demand if no new stock is added.

The government is obviously against the general secretary’s viewpoint considering the release published by the Minister of Commerce Luc Magloire Mbarga Atangana.

Let’s note that although it is highly consumed in Cameroon, the local rice production is really low. According to the Ministry of Agriculture, in 2020, the country produced only 140,170 tons of rice (24.3% of the local demand) while the demand was 576,949 tons. This leaves a gap of 436,779 tons, which is usually filled through massive imports of that food product whose prices remain closely monitored by the government since the 2008 food riot.