Cameroon: 4.5 million cocoa and coffee seedlings to be made available to producers in 2017 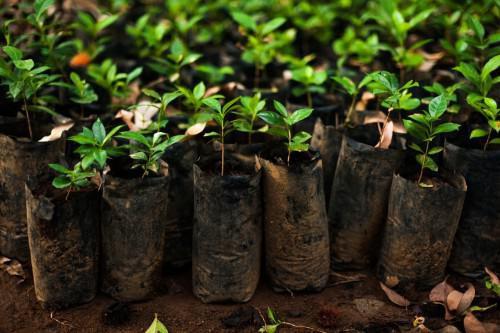 (Business in Cameroon) - The Cameroonian government, through its various branches in charge of promoting the cultivation of cocoa and coffee, will make available to producers a cargo of 4.5 million seedlings during the 2017 crop season, officially launched on 10 March 2017 in the town of Buéa, the South-West regional capital.

Based on revelations made by the Minister of Agriculture, Henri Eyébé Ayissi, this cargo will be made of 2 million cocoa seedlings against 2.5 million coffee seedlings. This planting material graciously offered to producers by the State should help with renewing aging cocoa-coffee trees which are consequently increasingly less productive.

As a reminder, the unavailability of planting material has often been listed by producers among the challenges to the development of agriculture in Cameroon. As an example, at the end of the catastrophic 2012-2013 coffee season (16,000 tons produced), the Inter-Professional Cocoa and Coffee Council (CICC) launched, in January 2014, in three production areas of Cameroon (Western, Eastern and Littoral), the Targeted Emergency Programme to revive Coffee Cultivation (Purc-café).

Purc-café, whose objective was to create 600 hectares of new farms on an annual basis, thus 1,800 hectares in 3 years, was unfortunately not implemented, mainly due to the unavailability of seedlings. According to CICC, who then requested from the national seedling programme a lot of 780,000 coffee seedlings, only 75,000 seedlings were handed over to Purc-café, barely 10% of the demand.

Relaunched and redefined in 2016, Purc-café should also provide this year, a “record cargo” of 2 million coffee seedlings, the Executive Secretary of CICC, Omer Gatineau Malédy, announced. This was a year ago during a ceremony in Yaoundé.