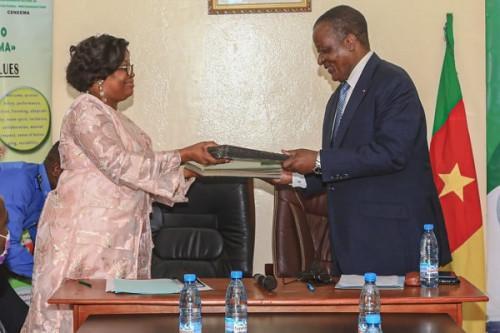 (Business in Cameroon) - On October 20, 2021, in Yaoundé, Livestock Development Corporation (SODEPA) and the National Centre for the Study and Experiment of Agricultural Machinery (CENEEMA) signed a partnership agreement to support the development of agricultural lands in ranches. Specifically, they will help private ranchers complement their breeding activities with agriculture. Also, in the framework of that partnership, SODEPA staff will be trained in agriculture machinery use and maintenance.

The agreement quickstarts the implementation phase of CENEEMA’s 2021-2025 strategic plan. According to the agricultural machinery company’s new director-general Andrée Caroline Mebande Bate, the over XAF50 billion plan is tailored around five main goals. They are notably development and valorization of the technical support potential, dynamization of research and experimentation, innovation and training, deployment of exemplary governance as well as reinforcement of partnerships and actors’ capabilities.

With that roadmap, a new CENEEMA is born as the new director-general says. It is expected to prompt the recovery of that state firm created in 1974. Indeed for over forty years, the firm has been in a state of lethargy mainly because of the age-long mandate of its former director-general, a certain Ernest Roland Ela Evina. From the creation of CENEEMA in 1974 to 2019, the latter has presided over the state firm’s destinies, totaling 45 years in that position.