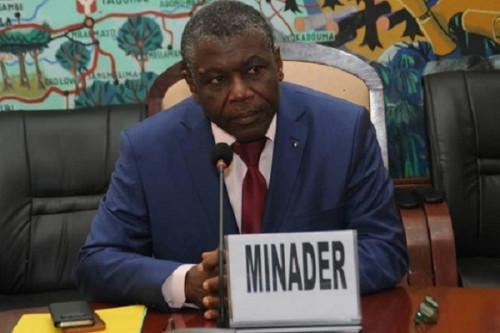 (Business in Cameroon) - On December 20, 2021, Cameroon’s Minister of Agriculture Gabriel Mbairobe (photo) assumed chairmanship of the Consultative International Cashew Council (CICC). The minister officially debuted his 1-year term at the end of the fourth regular session of this association of African countries that account for almost 70% of the global cashew production.

Cashew is a cash crop suitable for warm zones. Although it entered Cameroon in the 1970s, around the same time it entered Côte d’Ivoire, it is still unpopular. At the time, cashew production was introduced in  Sanguéré, in the North, in the framework of a reforestation program. But years later, the project initiators’ ambition is yet to be fulfilled. Nowadays, given the opportunities presented by cashew production, Cameroonian authorities intend to make it a complementary cash crop for cotton, which is currently the only cash crop produced in the northern regions (the North, the Far North, and the Adamaoua).

For that purpose, in 2018, Cameroon elaborated a national cashew value chain development strategy through the support of the German Cooperation. The aims are to introduce Cameroon into the global cashew market by 2023, create 150,000 jobs in the production segment in the three northern regions and the East within five years and create 1,000 jobs in the processing segment within the same period.

According to the national strategy, the desired goals will be met by developing 150,000 hectares of cashew plantations in Cameroon. In that regard, since 2018, the National Agricultural Research Institute for Development has been overseeing a project for the production and distribution (to farmers) of 10 million cashew seedlings. For experts, with those 10 million seedlings, the country will be able to develop 100,000 hectares of cashew plantation.