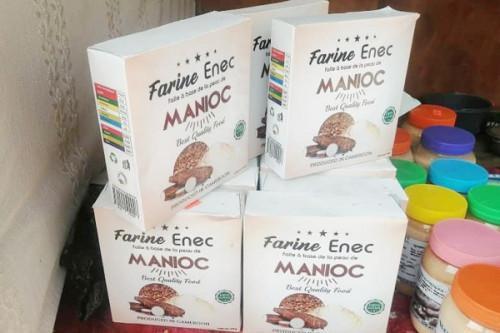 (Business in Cameroon) - On January 22, 2022, brewing company Guinness Cameroon unveiled the results of its "Orijinal Challenge", a competition aimed at celebrating made-in-Cameroon products. The winner of this challenge is Ernest Claude Ewoty Ndjie, who produces flour (branded ENEC after his initials) from cassava peels, which most housewives consider a waste product.

"When I collect the cassava peels, I wash them and remove the thin layer [ed. note: periderm]  because only the red or white membranes [ed. note: cortex] is important to me. I wash the peels two to three times and then take them to my laboratory to process them and destroy all the toxins they can contain.  After the processing, which lasts one month, I take them out of the laboratory to let them dry in the sun. When the peels are dry, after three to four days, they can be taken to the mill to be ground. This is the process that gives us our flour," he explained to media Défis Actuels.

The winner of the challenge was awarded a check of XAF5 million while the first runner-up goes with a check of XAF3 million against XAF2 million for the third innovation most voted by Facebook users.

This award comes amid fears of an increase in the price of bread that is generally produced from imported wheat.  Indeed, due to the increase in the international price of wheat, bakers are planning to increase the price of bread to pass additional expenses onto final consumers.  This threat revived the need to promote flours made from local products like cassava, potato, and plantain since they present many advantages.

"Cassava peel flour will create several jobs. We will slightly reduce unemployment because our business plan provides for the creation of 500 to 1000 direct and indirect jobs. Another economic aspect, as per my targets, is that we will reduce imports and foreign reserve outflow because currently, the price of wheat flour is rising exponentially. We hope that our flour will reduce or stop the outflow of our foreign reserve. Apart from that, we think that it can encourage young farmers to create cassava plantations," says Ernest Claude Ewoty Ndjie, whose dream is to boost his yearly flour productions estimated at 500 kilograms.

In 2020, Cameroon imported 860,000 tons of wheat, according to the strategic positioning of cereals and by-products processing published on August 25, 2021, in Douala, by the Enterprises Upgrading Office BMN. According to the same source, the value of those imports (up by 30,000 tons year-on-year) was about XAF150 billion.

"Russia is the leading exporter of wheat to Cameroon with nearly 300,000 tons, followed by Canada (144,000 tons), France (117,000 tons), and the United States (54,000 tons)," the BMN study informs. Indeed, since the bankruptcy of the Wheat Development Company (Sodeblé) in 1980, Cameroon has been resorting to importation to meet almost all of its wheat needs.

This situation made Cameroon a good business ground for international traders like French group Céréalis.  In 2015, Remi Depoix, Cerealis CEO, revealed that every year, his group exports close to 200,000 tons of wheat to Cameroon, generating about 20% of its turnover.