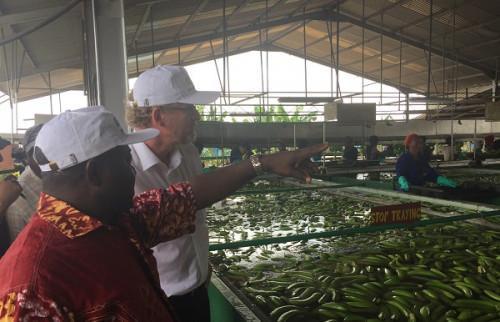 (Business in Cameroon) - On July 25, 2019, Cameroon Development Corporation (CDC)’s de Mafanja I packing station in Tiko, Southwest Cameroon, was in a sad state. Only the guards were visible at what remains of CDC’s largest packing station.

The ground of the large uncovered area was full of old boxes, which were used to pack the renowned Makossa banana, before that fateful night of August 2018 when Anglophone separatists burnt the packing unit.

Since then, there has been no banana shipment to Mafanja I. In addition, the 3,715 hectares of CDC’s banana plantations are abandoned. Only the infirmary is still functional and providing treatments for employees, most of whom have had their fingers cut off by secessionists.

By cutting the employees’ fingers, the secessionists wanted to stop them from coming to the company’s banana, rubber and oil palm plantations. Some of these plantations have even been converted into training grounds for the secessionists who have been violently requiring the country’s partitioning for two years now.

As a result of this violence, during the 2018 fiscal year, CDC recorded a net loss of XAF32 billion, according to Christopher Ngalla, manager of CDC’s banana department. This is an economic catastrophe since an average of XAF500 million is injected into the Southwestern region’s economy every month, the manager added. So, the banana sector has been militating for the resumption of CDC’s activities.

According to our sources, recently, instructed by the president, there has been many meetings in the offices of the prime minister to discuss the subject. Sources close to the case even foresee an activity resumption in Q3, 2019, on about 1,000 hectares for a start at least.