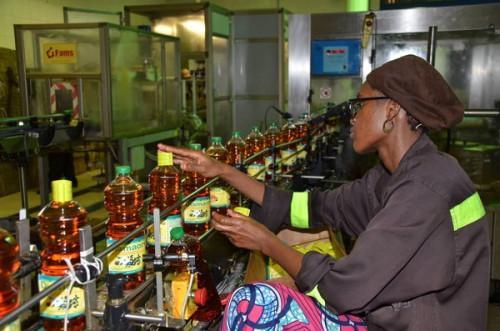 (Business in Cameroon) - State-owned cotton development company -Sodecoton- is gradually recovering following a decline over the past decade. Official data shows that revenues from the sale of cotton oil reached XAF17.7 billion in 2018 from XAF16.2 billion in 2017 and XAF10.7 billion in 2016, an improvement by XAF7 billion over the 2-year period.

Thanks to this significant upturn, a company executive said, Sodecoton now funds its current operation with revenues from the sale of cotton oil and cake, since March 2017, while it used to resort to loans. “The Diamaor oil (the company’s flagship oil brand) has never been so well on the market. Demand even exceeds offer, despite regular augmentation in production,” the executive said.

Back in mid-2016, due to poor sales of its flagship product, Sodecoton found itself with a stockpile of 149,000 oil packs and 4 million liters of unpackaged oil, all for an estimated value of about XAF9 billion. “This oil (Diamaor), so demanded by Cameroonians, has gone through a severe crisis in recent years, which has taken it off the shelves,” he explained.

“Poor sales were partly due to the high cost price, but mostly due to a marketing channel that benefited direct sellers. The latter acted as middlemen between Sodecoton and wholesalers and quasi-controlled the product. Many wholesalers had to give them margins to get the product. And as spillover effect, margins are recovered from semi-wholesalers, retailers and consumers. Consequence: the price of this oil brand skyrocketed and the product gradually disappeared from the market.”

In response to this situation, the company’s top management undertook as of 2016 to reorganize the marketing segment. Thus, the process to obtain cotton oil sale approval has been made easier and the company has signed performance contracts with sellers, meaning they now receive discounts based on volumes sold. Thanks to this reform, sales increased by 64% between 2016 and 2018.

Comforted by this good evolution, Sodecoton started injecting funds into the modernization and expansion of its oil mills. With a XAF2.5 billion loan contracted with Afriland First Bank, the company doubled capacity of the Maroua oil mill and plans to do the same at Garoua thanks to a XAF6 billion loan granted by the Arab Bank for Economic Development in Africa (Badea).

In the long run, Sodecoton aims to increase the crushing capacity of the two oil mills to 210,000 tons of cotton seeds, from 110,000 tons currently. Production is expected to surge from 1.13 million oil packs in 2019 to 2.15 million packs as soon as work is completed. Construction of a new oil mill is underway in the city of Ngaoundéré, it is reported, with a view to increasing cotton production to 400,000 tons by 2022