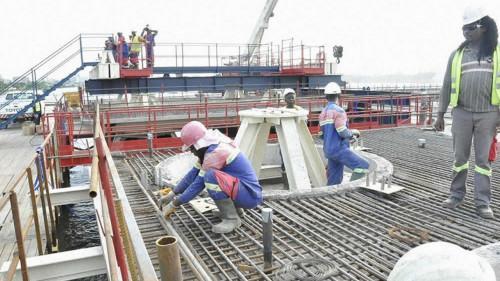 (Business in Cameroon) - Delivered December 2018, the 2nd bridge over the Wouri River constructed by Sogea Satom will be refurbished due to damages caused by flood.

In a press release on March 29, the minister of public works, Emmanuel Nganou Djoumessi, explains that “heavy rains in the city of Douala affected the facility located on the access ramp to the old Wouri Bridge, causing flooding on the main access section to the 2nd bridge. ”

“The water evacuation capacity of this infrastructure is reduced due, first, to the presence at its outlet of a 1200 mm water pipe implanted by Camwater [the water utility] and, on the other hand, to the obstruction of this outlet by solid materials thrown by bridge users,” explains Mr. Nganou Djoumessi.

He also pointed out that Sogea Satom, the representative of the consortium that designed and built the 2nd Wouri Bridge and its complementary installations, had already been asked to take corrective measures as part of its obligations under the guarantee period.

“A technical team of engineers from the Ministry of Public Works has joined the project team as of today [29 March 2019] to definitively determine the appropriate corrective measures to put an end to this malfunction.”

Valued at XAF141.6 billion, this second bridge covers a 756 m long road viaduct and a 746 m rail viaduct. It is a strategic axe that facilitates traffic flow in the industrial zone and downtown Douala and connects the economic capital to the northwest, southwest and the west.