Road paving: Cameroon's ambitions for the next decade are unrealistic, the GICAM believes 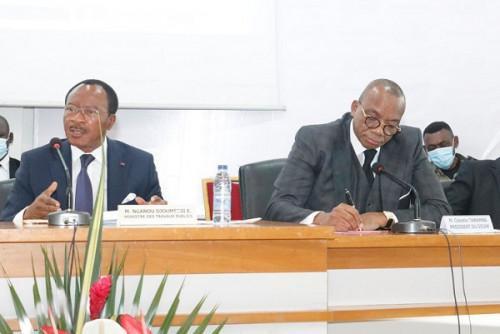 (Business in Cameroon) - In its Growth and Employment Strategy Paper (GESP), Cameroon promised to asphalt 3,500 km of roads between 2010 and 2020. However, to date, only 65% of that target (equivalent to 2,274 km) has been achieved. This was revealed by Célestin Tawamba (president of employer’s grouping GICAM) during a meeting with the Minister of Public Works Emmanuel Nganou Djoumessi on November 27, 2020, in Douala.

During the meeting, Célestin Tawamba expressed his surprise following the government’s stated ambition to pave 6,000 km of road (which is thrice the length paved during the previous decade) over the 2020-2030 decade despite the non-fulfillment of the previous target.

"Though the implementation rate is low, it is even worrying given the state of the road network, particularly that of the so-called paved sections. Apart from the sizing issues, the current state of some of the axes is puzzling,” the president of GICAM said.