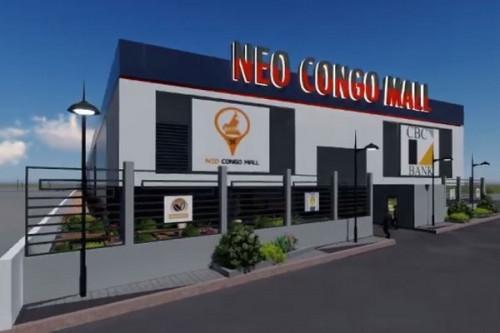 (Business in Cameroon) - In the next 18 months, Douala will have a gigantic centre at the former Marché Congo destroyed by two fire outbreaks (in 2012 and February 2019). The foundation of this modern shopping area, with 3,350 shops, commercial equipment, restaurants and 300 parking spaces, has just been laid.

According to the promoters of this shopping space, to avoid the fire outbreak that destroyed Marché Congo, this centre, which will be built on the destroyed market’s site, will be equipped with “latest generation fire safety system.”

The modern market, an investment of about XAF28 billion, is the result of a public-private partnership (PPP) between Douala Urban Community and Cameroonian economic operator Emmanuel Neossi, promoter of Neo Industry, a cocoa bean processing unit recently opened in Kekem, in the Western region.

Named Neo Congo Mall, the shopping centre will be Emmanuel Neossi’s major real estate project, after the signature, in September 2019, of a joint venture agreement with the French business engineering company CIOA for the creation of Neo Real Estate, 49% controlled by CIOA and 51% by Neo Industry.

According to the terms of this joint-venture agreement, this joint venture is licensed to use CIOA group's Bati-Fablab micro-plant technologies, which will help Neo Real Estate produce 80% of the building materials it needs in Cameroon. This joint venture, according to authorized sources, also plans to install a pilot Bati-Fablab with a capacity of 1000 housing units per year in Western Cameroon.

Thanks to this partnership with CIOA, Emmanuel Neossi should more easily carry out the Neo Congo Mall project that Southwest International Construction Corporation (SICC), a joint venture between American investors and Cameroonian Soppo Ngalé, was unable to realize. Indeed, SICC's BOT (Built Operate Transfer) contract for the construction of a XAF7 billion shopping centre (1,400 shops) on the Congo market site in Douala was terminated by Douala Urban Community after the February 2019 fire.

At the time, the municipality mentioned the “failure” of its partner, which launched the project in 2013, to meet delivery planned for 2018. But that was without taking into account the financial difficulties and the beginnings of the SICC managers, all factors that finally got the better of this first project.