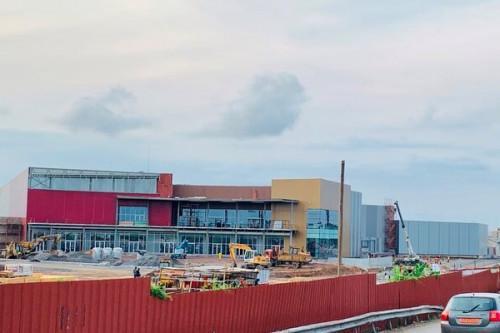 "(Business in Cameroon) - Only a few weeks to go before the end of the work on the largest mall in Central Africa." This is the message the Douala Grand Mall and Douala Business Park construction project team, led by British investment fund Actis in partnership with Craft Development, announced on April 22.

"On the site, construction company Raubex’s teams are working hard to deliver the infrastructure on time. The beautiful rear and front facades can already be seen. On the plaza, the finishing touches are being put on the terraces, driveways, parking lots and green spaces. As far as the interior is concerned, the shops are ready, escalators and lifts have also been installed while the air conditioning is being installed and the tiling work is in its final phase," the project team explains.

This ultramodern shopping centre with 18,000 m2 of leasable space is dedicated to entertainment, leisure, and shopping. With its expected 300,000 monthly visitors, this potential business center aims to revolutionize retailing in Cameroon.

The foundation stone of the Douala Grand Mall was laid on April 11, 2018. The over XAF80 billion investment, the fruit of the cooperation between Cameroon and Great Britain (through the investment fund Actis) and the private company Douala Retail and Convention Centre (DRCC), is expected to generate 4,500 jobs.

According to the schedule of works, the spaces larger than 300 m² were delivered between December 2019 and January 2020. The delivery of spaces whose width is less than 300 m² was scheduled for March 2020 while the end of the works is scheduled for the second quarter of 2020.