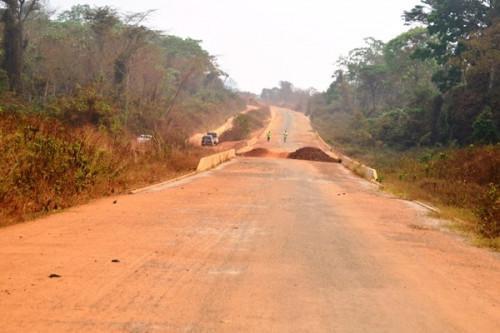 (Business in Cameroon) - Sixty days. That is how many days Cameroon’s minister of public works (Mintp), Emmanuel Nganou Djoumessi, gave the Chinese firm China International Water and Electric Corp (CWE) to complete its construction works on the Nkolessong-Nding road (89 km) and the Nanga-Eboko-Bifogo axis (6 km).

The deadline, issued on 1 July 2020, comes as the CWE halted all works on the project six months ago, with only 11 km left to complete. “There is no way building 11 km of road will take six months. It is unacceptable,” complained Djoumessi.

The official’s discontent is quite understandable especially since the Chinese contractor already received a XAF1.734 billion payment (which corresponds to 73.04% of the total amount agreed) and used up 94.02% of the planned schedule.

In response to the ultimatum given by Cameroonian authorities, executives at the CWE assured they were committed to complete the project while explaining that the delays are due to the unavailability of the asphalt needed to pursue works and the fact that Chinese engineers working on the project are stranded in China as borders are closed due to the Covid-19 pandemic.

CWE, it should be noted, was awarded the above-mentioned project five years ago for XAF43.998 billion. And while this is not the first time the Chinese company delayed in the related works, its main excuse in the past was that the government failed to make payments on time.