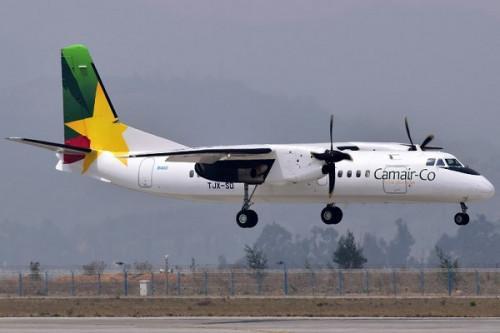 (Business in Cameroon) - In the coming weeks, Cameroon’s public airline Camair Co will receive two new Bombardier Q400 aircraft to densify its fleet, credible sources reveal. The sources are silent concerning the amounts and conditions of those purchases but it is worth noting that through those purchases, the airline is implementing one of the measures aimed at restructuring the company.

Indeed, on July 14, 2020, Minister of State Ferdinand Ngoh Ngoh sent a letter to the Prime Minister informing of the release of XAF15 billion to Camair Co. That amount was to be used to send one of Camair Co’s “Boeing 737-700 NGs to the maintenance facility, acquire two Dash Bombardier Q400s (better suited for short routes), and lease two engines for the second Boeing 737-700 NG.”

Apart from densifying Camair Co’s fleet, the acquisition of those two aircraft will help increase the number of domestic destinations and also make the company attractive for potential strategic partners.

"The Head of State instructs the Prime Minister, Head of Government, to urgently develop -in collaboration with the Minister of Transport, the Minister of Finance, the Minister of Labour and Social Security, Camair Co, and the CCAA (Cameroon Civil Aviation Authority)- a restructuration, recovery, and development plan for the company. The aim is to open 51% of its capital to a private strategic partner, per Article 5 September 11, 2006, decree creating Camair Co," Ferdinand Ngoh Ngoh added in the July 14, 2020, letter.