Cameroon: A Carrefour’s Cash & Carry store to be launched by end 2020 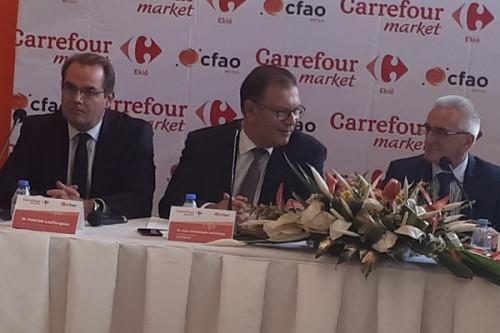 (Business in Cameroon) - In the framework of its expansion in Sub-Sahara Africa, French retail group Carrefour, which partnered with CFAO Retail for this conquest of the African market, inaugurated a new supermarket on October 9, 2019, in Cameroon.

Located at Ekié, Yaoundé, this supermarket, built over a 7,200 m2 land (building and parking included), is the 2nd Carrefour supermarket launched in Cameroon. The first was launched in Douala, in December 2017. Like the Douala supermarket, Carrefour Yaoundé will offer close to 1,500 local products.

A result of an investment of about XAF7 billion, the newly launched supermarket has helped create 150 direct jobs and about the same number of indirect jobs, according to Luc Demez, managing director of CFAO Retail Cameroon.

According to Jean-Christophe Brindeau, managing director of  CFAO Retail, who was in Yaoundé for this inauguration, the partnership of Carrefour-CFAO Retail will continue its expansion in Cameroon by opening at least two new supermarkets at Akwa shopping district in Douala in early 2020.

There will be a Carrefour supermarket and the first-ever Supeco shop to be launched in Cameroon, whose launch was initially planned for this year. “Construction works have started," Jean-Christophe Brindeau indicated while talking of the Supeco store.

Specialized in the Cash & Carry concept, a concept according to which people can buy things in bulk and cheaply, Supeco will join BAO on this segment. Indeed, on March 28, 2018, Casino group officially launched BAO, which was the first Cash & Carry experience in Africa, in Douala.

Overall, by end-2020, Carrefour-CFAO Retail will have five supermarkets in Cameroon. Four should be in Douala (Bonamoussadi, Akwa, Douala Grand Mall, and Supeco) while one will be in Yaoundé (Ekié).

It is worth adding that according to Luc Demez, a Carrefour’s PlaYce superstore will be opened in Yaoundé during Q1, 2021. It will be four to five times larger than the Ekié supermarket inaugurated on October 9, 2019.

With the launch of the PlaYce superstore, Carrefour and CFAO Retail will complete the first phase of their expansion in Cameroon. This first phase plans for the construction of 6 supermarkets for an investment of about XAF80 billion. “We have started looking into other towns. In four or five years, we could open new supermarkets outside Douala and Yaoundé,” Luc Demez says.