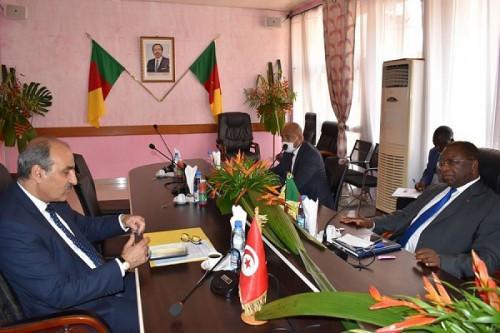 (Business in Cameroon) - At the end of a meeting with  Minister of Commerce, Luc Magloire Mbarga Atangana, the new Tunisian Ambassador to Cameroon, Karim Ben Becher, made new revelations about the direct air link project to connect Cameroon and Tunisia.  According to the diplomat, "discussions are underway to see if there is a possibility to revive the project either through the national air carrier [TunisAir] or through the private sector," the Ministry of Commerce reported on its Facebook page.

The diplomat provides no further details about the ongoing discussions but the project involving Tunisair opening a direct air route to Cameroon should have been launched in 2020. However, with the coronavirus pandemic, it did not come to fruition.  "The plan was to create a first route connecting Tunis to Yaoundé and Douala with, perhaps, stopovers in Ndjamena and Libreville. Unfortunately, we were hit by the coronavirus pandemic, which affected airlines worldwide," the diplomat said.

In July 2020, at the end of his mandate in Cameroon, Jalel Snoussi (predecessor of  Karim Ben Becher) indicated that for over two years, the project had been delayed by fiscal problems and Tunisair’s fleet problems. "The state-owned airlines is working to increase its fleet with a view to boosting its routes, African particularly. The direct air link to Cameroon will be immediately launched once the fleet is sufficiently augmented," explained Jalel Snoussi.

The Tunisia-Cameroon direct air link project was born as a solution to the low contact between the two countries’ economic operators. Indeed, as the former ambassador regretted, few Cameroonian operators travel to Tunisia.