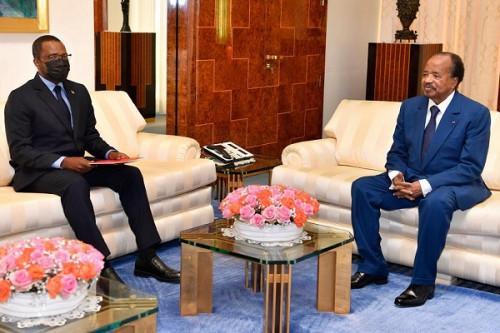 (Business in Cameroon) - Equatoguinean Minister of Mines and Hydrocarbons Gabriel Mbaga Obiang Lima was granted an audience on September 13, 2021, by Paul Biya, President of the Republic of Cameroon.

According to the Presidency of the Republic of Cameroon, the ongoing discussions will lead to an enhancement of cooperation between Cameroon and Equatorial Guinea in the hydrocarbons sector. The Equatoguinean emissary explained that he came to present his country’s new initiative to boost trade with other African nations and at the same time request President Paul Biya’s approval. Without much detail, he informed that the Cameroonian president deemed the initiative beneficial for economic development during these challenging times.

Cameroon and Equatorial Guinea are convinced that in the CEMAC region, economic development requires an enhancement of commercial exchanges between member countries and their African peers, Gabriel Mbaga Obiang Lima explained."We cannot always depend on trade exchanges with the USA, Europe, and Asia. We need to develop intra-regional trades," he added.

According to the official, Cameroon is not the only country targeted by Equatorial Guinea for the enhancement of cooperation in the hydrocarbons sector. For instance, he said, his country recently chartered a vessel to send methanol to Gabon and negotiations are ongoing to import oil and gas from Nigeria to Equatorial Guinea.