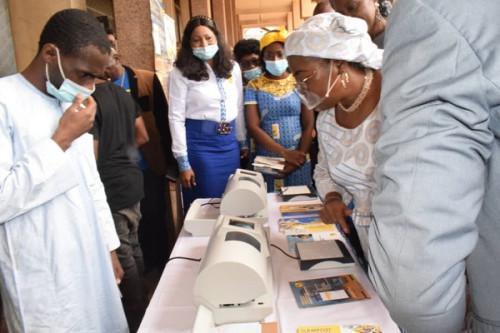 (Business in Cameroon) - On November 12, 2021, the Yaoundé based state firm, Cameroon Postal Services (Campost) received 58 franking machines. It was gathered from the Minister of Posts and Telecommunication (Minpostel) - Minette Libom Li Likeng - that this is the first lot of an order of 330 machines. They are bought to help “Campost meet new market demands.  Specifically, Campost will try to capture market shares mostly from major billing customers such as electric and water utilities, banking, cell phone, and insurance operators, as well as large entities (companies, courier services, administrations, etc.),” the minister explained.

In fact, with its new franking machines, Campost will offer specific franking services to entities with large customer portfolios.  Usually, those entities want to distribute their invoices through postal services and require specific equipment to stamp those invoices.

With the service to be offered by Campost, they will now have the choice to either entrust the distribution of those invoices to Campost or simply subcontract it as they are doing presently. “ As you know, legally, the postmark serves as proof.  Instead of taking their invoices to the post office, there is a new service called hybrid mail. It comes as a digital file that Campost prints and stamps through its machines. So, either those large companies entrust the distribution of those invoices to Campost, or they can subcontract the service as they are doing now. The project here is to install these machines in the units of these large companies so that they automatically manage the invoice files. Alternatively, Campost can lease the franking machines to companies because till date, they have been editing those invoices in-house,” an authorized Minpostel official indicated.

According to the postal operator, apart from helping to secure new market shares, the franking machines will contribute to the reduction of stamping frauds thanks to the secured prints. Stamp frauds “constitute a real threat for our operations as we have been witnessing for some time now when civil service examinations are launched. Several complaints were issued in that regard,” declared  Pierre Kaldadak, Director-General of Campost.

The purchase of those equipment is in line with the 3-year performance contract binding Cameroon and Campost since October 18, 2018. This restructuring plan aims to ensure basic postal services, support innovation-based production to transform the postal operator’s traditional business lines, and align with new market trends. The measures currently being implemented are expected to support a 14% overall growth for the company in 2020-2021 driven by postal products (+12.3%), financial services (+17.5%), and E-Post (+14.08%).

Four funding windows have been identified to support this XAF22.8 billion plan. The government (through the Ministries of Finance, Posts, and Telecommunications) is committed to providing XAF18.3 billion thanks to the support of the AfDB. The remaining envelope will be borne by Campost.