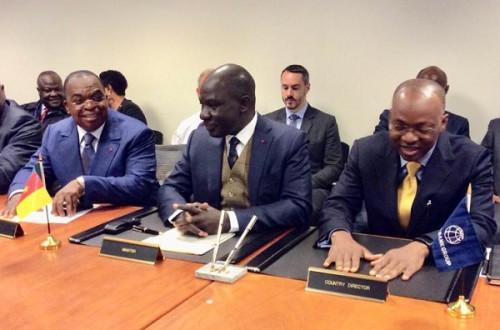 (Business in Cameroon) - On October 15, 2019, Cameroon, via its minister of the economy Alamine Ousmane Mey, signed a $200 million (XAF117.744 billion) funding agreement with the World Bank's International Development Association (IDA). The agreement is for the second support to development policies initiated by Cameroon for fiscal consolidation and inclusive growth.

“With this XAF117.744 billion funding agreement, the Cameroonian public treasury will have important financial resources to face the government’s commitments. I salute the World Bank’s decision to double the amount initially planned, from $100 million to $200 million. In addition, I am glad the financing terms have also been eased. Indeed, the financial resources are provided as IDA loans, not as IBRD loans as it was the case for the first operation,” minister Alamine Ousmane Mey said.

The first funding operation the official was referring to was concluded in December 2017, for a $200 million funding agreement. It resulted from the implementation of reforms that led to the conclusion of an economic and financial programme with the IMF.

According to the ministry of the economy, the second agreement is also the result of the satisfying implementation of other reforms aimed at diversifying the economy, consolidating the fiscal environment and enhancing the protection of vulnerable people.

Talking of fiscal consolidation reforms, Cameroon informs that it successfully inscribed measures at cutting, by XAF100 billion, indirect taxes’ fiscal expenditures in the 2019 finance act. In addition, in June 2018, it adopted a new public procurement code and in November 2018, it signed a decree aimed at redefining the principles governing the creation and functioning of commissions, committees, working groups and ad hoc committees. In June 2019, the country also signed a decree setting the categories of state-owned companies as well as the compensations, and benefits of the companies’ managers.

As far as competitiveness is concerned, the reforms were aimed at improving the energy sector’s financial sustainability as well as building the private sector’s trust. Also, reforms were initiated to improve the management and maintenance of road assets as well as the improvement of port and logistics chains’ performance. The management of the payments of the central administration’s bills has also been improved while the government’s payment arrears have been settled and measures taken for the regularization of governments’ subsidies to utility company Eneo. The account, domiciliated at the BEAC, and dedicated to the roads fund were also filled for the regular payment of dues of the road maintenance programme, before 2017, and the implementation of the 2018/2019 priority program.

The reforms initiated for the protection of vulnerable people are namely an increase in the performance and quality of care provided in health facilities, an improvement of access to course books and increase of the funds dedicated to social programs. Grants to health facilities have been paid. There is also increased access to drugs and medical devices from accredited suppliers. The national committee in charge of the monitoring and assessment of the national schools’ booking policy has also adopted a guidance document for the preparation of a new policy for books to be used in pre-primary, primary and secondary education.

In the 2019 finance act, the government set a XAF4.5 billion budget line for the implementation of social programs to 11,250 households.