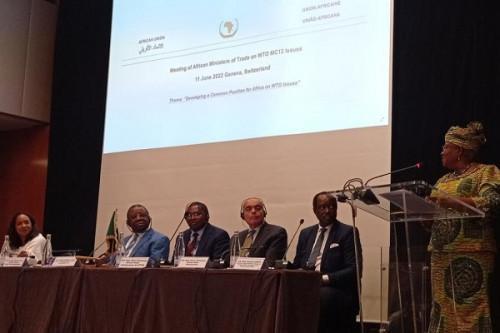 (Business in Cameroon) - The Cameroonian Trade Minister, Luc Magloire Mbarga Atangana, representing his country at the 12th Ministerial Conference of the World Trade Organization (WTO), held in Geneva last June12-15, suggested that world trade rules be revised as they are “unfair to Africa”.

He said Africans expect the WTO to launch bold programs to restore normal rules for regulating global trade flows without delay. Such initiatives will help get them out of hunger, he said. "Cameroon, therefore, calls for an update, a return to the roots of multilateralism. The 12th Ministerial Conference of our Organization gives us that opportunity. We must show solidarity and operational pragmatism ," he said.

The official indicated that Cameroon is ready to discuss issues related to food insecurity, which threatens a significant part of the world's population; the deregulation of supply chains, which prevents the poorest countries from benefiting from international trade; the contribution of trade to curbing the coronavirus pandemic, particularly through the facilitation of production and access to vaccines; the imbalance of global rules in the agricultural sector. Other issues to discuss include fisheries subsidies and the settlement of trade disputes.

"What would be the point of pretending not to see anything, when the situation is serious and many nations in the world, especially in Africa, are close to an imminent and unprecedented food crisis?” asked the Cameroonian Minister.

Mbarga Atangana believes that the work of the 12th WTO Ministerial Conference is taking place at a crucial time, which challenges and engages the collective and individual responsibility of States on the meaning and future of this organization and, more broadly, on trade multilateralism.