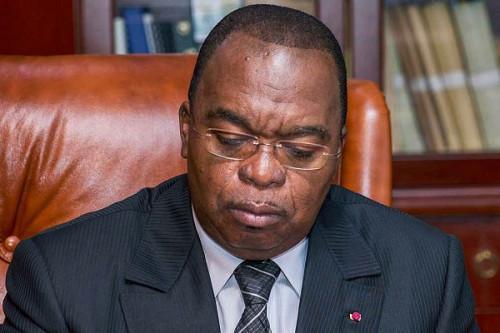 (Business in Cameroon) - On November 16, 2021, Minister of Finance (Minfi), Louis Paul Motaze (photo), signed a decision reducing the freight rates to be integrated into the calculation of imported goods’ customs value. “The freight rate to be used for the calculation of the customs value of goods imported by sea must be decided by reducing the total amount actually paid or to be paid for the shipment of such goods by 80%, in the context marked by an unprecedented rise in the cost of international goods transportation services,” the Minfi wrote.

According to the official, this measure will be effective untill February 28, 2022, and is renewable if necessary.  Guy Innocent Diffouo, Head of the Legislation Department at the Directorate General of Customs, explains that thanks to the reduction decreed through this decision, importers will no more feel the impacts of the rising international freight costs.

"To determine the customs value of an imported good, freight costs and insurance rates are added to the goods’ purchasing price. The customs and tax duties to be paid by the importer are calculated based on that customs value.  For almost eight months now, there has been an unprecedented rise in maritime freight rates. Depending on the country, those rates are up by 40 to 70%. This is good for the State since the more customs values increase, the more revenues it will generate. But, it makes life more expensive with retail prices going up. So, basically what the Minister of Finance did with this crucial decision is to mitigate the impact of the rising freight cost and keep customs value static,”  he explained.

Through that decision, the government “relinquished on the revenues it would have collected thanks to those rising freight costs. For instance, if in January, the freight cost was €1000 per container and today it is €5000, [there is an additional €4000 that would have been added to calculate the imported goods’ customs valued]. The impact of the measure issued by the Minister of Finance is that it will reduce the freight rate to be taken into account for the calculation of the customs value by €4000, meaning that things are back to normal,” he added.

The decision signed by the Minister of Finance states that the 80% reduction was decided by taking into account a suggestion from the Inter-Patronal Grouping of Cameroon (GICAM), the largest employers’ grouping in Cameroon. In a release issued on November 9, 2021, the employers’ grouping revealed that in several sectors, firms were exposed to an unprecedented increase in “the price of imported products and maritime freight rates with increases ranging from 20 to 400%.”

It then stated that firms could stop importations and productions on January 1, 2022, should it become difficult for them to adapt to the steep rise. For  Célestin Tawamba, Chairman of the GICAM, firms are now contemplating that option given the seeming lack of future change.  Should firms be compelled to reach such a point,  the domestic market could be exposed to supply problems whose main consequence will be food crisis risks and inevitable social impacts that “nobody wishes for”, the release informed.