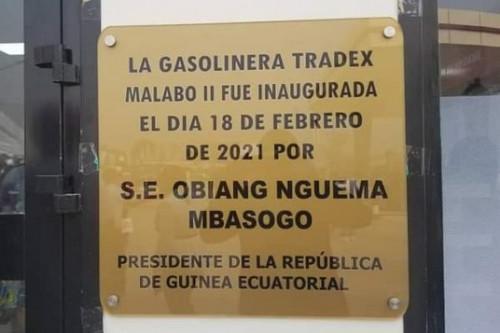 (Business in Cameroon) - The Equatorial Guinean Head of State, Teodoro Obiang Nguema Mbasogo, officially inaugurated the Cameroonian oil company Tradex’s first filling station in his country on February 18th. The construction of this petroleum products sales outlet was launched on May 19th, 2020, in Malabo II, a luxurious extension of the Equato-Guinean capital, entirely built after the discovery of oil in that country considered as an important oil producer in the CEMAC region.

According to Tradex, a subsidiary of the National Hydrocarbons Corporation of Cameroon (SNH), the filing station inaugurated has a storage capacity of 100,000 liters of fuel (super and Gasoil) and 300 tanks of 12.5 kg of butane gas. The construction work was carried out by the Equatorial Guinean construction company Alammarin For Constructing SL.

Cameroon’s flagship in the distribution of petroleum products, Tradex is thus starting a XAF15 billion investment program that will span over three years. In the framework of that program, a network of 10 filling stations will be built in Equatorial Guinea. Tradex will therefore expand its footprint in this country thanks to the license it obtained on December 17th, 2018, allowing it to market petroleum products in that neighboring country.

With the 2018 license, Tradex, which recorded a net result of XAF10.3 billion for a turnover of XAF291 billion in 2018, was marking its official entrance into the Equato-Guinean petroleum product market after its entrance in the Republic of Central Africa and Chad. C

Prior to that license, the company was already operating in Equatorial Guinea. Indeed, on November 3rd, 2015, it signed a contract with Luba Oil Terminal Equatorial Guinea (Loteg) to store its products at Loteg’s warehouses at Luba Free Port. That way, it was able to exclusively supply the petroleum products to vessels that come for refilling at  Luba Free Port.