Cameroon: Matgenie's debt widened to CFA14.24bn due to "salaries without justification" 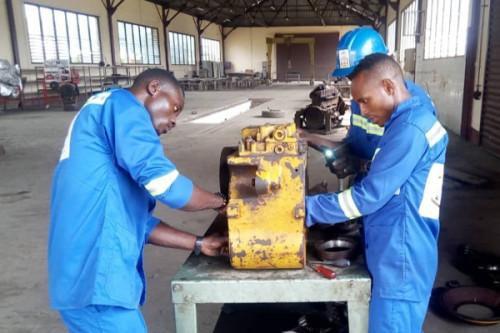 (Business in Cameroon) - The plan to clean up the human and material resources of the National Park of Civil Engineering Equipment (Matgenie) ordered by the Ministry of Public Works (Mintp) found that the company pays "unjustified salaries” to some workers.

“The initial results, after analyzing the progress report of the ad hoc inter-ministerial committee, show that personnel costs are too expensive in the company and absorb nearly 84.5% of turnover. This is because some workers receive salaries without justification,” the Ministry said.

This situation, we learn, brings the company’s debt to CFA14.24 billion, including unpaid salaries of CFA 2.2 billion; a tax debt of CFA2.4 billion; CFA3.9 billion owed to suppliers; CFA2.6 billion of social contributions due to the National Social Security Fund, and CFA3 billion due to the Ministry of Finance. "This could eventually constitute a budgetary risk for the state if the situation persists," according to the 2020 report of the Technical Commission for the Rehabilitation (CTR) of Public Sector Enterprises and Establishments in Cameroon. Also, social peace is threatened by irregular payment of salaries and social benefits.

As a way out, the Minister of Public Works, Emmanuel Nganou Djoumessi, prescribed on September 15, during an ad-hoc inter-ministerial meeting held in Yaoundé, to control Matgenie's expenses. He said this could be done by linking payroll to productivity.