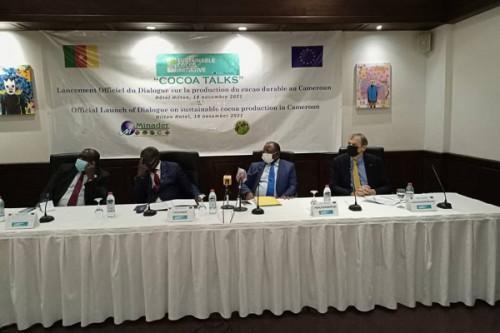 (Business in Cameroon) - On November 18, 2021, in Yaoundé, Cameroon organized a ‘Cocoa Talks’ with the European Union, the world's largest cocoa importer, on the production of sustainable cocoa. According to Philippe Van Damme, Head of the European Union delegation to Cameroon, the talks are aimed at fighting child labor and exploitation in the cocoa value chain, enhancing forest protection and restoration in cocoa-producing regions, and ensuring a minimum subsistence income for cocoa farmers.

The new law, being debated by the European Union’s parliament, on rules to cocoa importers have to abide by to obtain the status of ‘sustainable firms’ was presented.

"These ongoing legislative initiatives will help minimize the EU's contribution to global deforestation, and promote the consumption of products from deforestation-free supply chains. The second proposal is related to corporate governance. This legislative proposal will entail due diligence by the European Union to ensure the traceability of its forest products’ supply chain. It is time for Cameroonian actors to reflect on these new export criteria," Philippe Van Damme said.

Under that law, economic operators will have to abide by a set of rules and exclude products that cause deforestation and forest degradation from their supply chain. Only so-called sustainable producers will continue to import their cocoa to the EU.

In response to that presentation, Cameroon’s Minister of Trade Luc Magloire Mbarga Atangana responded that the European party seems not to be intent on increasing farmers’ income.

He stressed that although the farm-gate price has improved from XAF700 per kilogram in the 1990s to a peak of XAF1700 at times, it is still insufficient. Referring to data from the International Cocoa Organization (ICCO), Mbarga Atangana painted a bleak picture of the situation of African producers. According to him, out of the annual US$100 billion generated by the sector, only US$2 billion or 2% go to farmers while chocolate makers take the lion’s share with 35% of the turnover. The rest goes to the grinding industry and transporters, we learn.