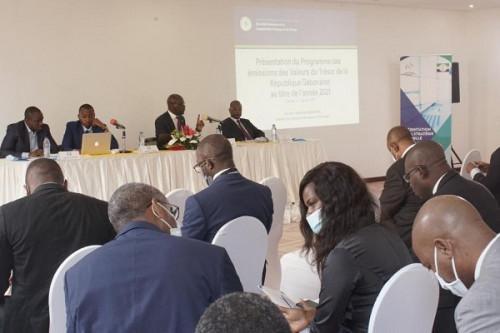 (Business in Cameroon) - To ensure success for its public securities issuance program this year, Gabon (which intends to raise XAF885 billion on the CEMAC money market this year) initiated a roadshow in the CEMAC zone. This investors’ wooing operation started on January 13, 2021, in Douala, Cameroon’s economic capital.

"Cameroon was chosen to launch these operations because of its dynamic financial center, which hosts a large number of of the subregion’s institutional and individual investors," explained Ulrich Mbadinga, Director of Monetary and Financial Operations at Gabon’s General Directorate of Public Accounting and Treasury.

Let’s note that according to Gabon’s 2021 finance law, the country is authorized to raise XAF320 billion on the regional money market. But, the delegation dispatched to Douala by the Gabonese government did not explain why the financing envelope it is planning to raise on the said market is now XAF885 billion instead of the authorized amount.

This success in the money market is not only due to the quality of the country’s signature but also to the dynamism of its investors, which is a quality Gabon is planning to take advantage of for its 2021 fundraising program.

Indeed, be it on the BVMAC or the BEAC money market, the investors in CEMAC’s leading economy (Cameroon) are always the most dynamic. The success of any fundraising operation in that community space inevitably depends on the feeling of Cameroonian investors about it.

For instance, in a report on operations on the public securities market at the end of June 2018, the Supervisory Board of the BEAC’s Securities Settlement and Custody Unit (CRCT) reveals that four banks operating in Cameroon are among the top 10 investors in this market, which helped CEMAC states raise XAF352 billion during the period under review. This represents about 30% of the outstanding debt of the States on this market (XAF1,020 billion) during the above-mentioned period.

Also, according to the same source, during the period under review, with over XAF150 billion provided to public treasuries in the region, Cameroonian bank Afriland First Bank was the leading financier.

Gabon’s 2021 issuance program is the most ambitious ever announced on this market since its launch in 2011. It also augurs tough competition on the market and portends for a probable rise in the interest rates to offer investors.