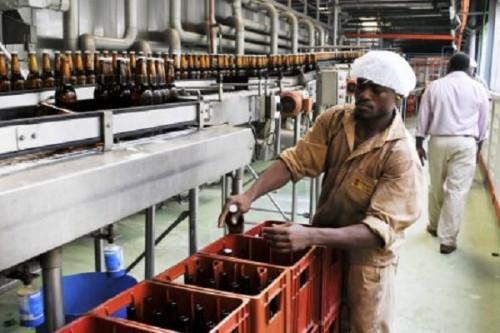 (Business in Cameroon) - Right after it had finalized the acquisition of Guinness Cameroon from Diageo, the French group Castel embarked on the deployment of its expansion strategy. The owner of local brewer SABC plans to invest CFA120 billion overall over the next 4 years.

According to reliable sources, Castel will develop 4 new production lines for Guinness products, and inject CFA4 billion to increase the capacity of its glass factory -Socaver (Société camerounaise de verrerie)- by 40 million bottles. The new production lines will be established in SABC (Castel's local subsidiary)’s factories in Yaoundé, Douala (Ndokoti), Garoua and Bafoussam. These cities are the subsidiary’s main production and distribution hubs.

Dayalan Nayager, President of Diageo Africa, the African branch of Guinness Cameroon’s parent company, said: “This strategy should allow Guinness Cameroon to further unleash its potential and consolidate its leadership position in the dark beer segment.” While demand for Guinness beer is on the rise in Cameroon, the company only produces an average of 1.4 million hl a year compared to 10 million hl for SABC. The agreement between Castel and Diageo, therefore, comes at the right time to help at least double the production and distribution of Guinness beer in the country, according to inside sources.

With higher production requiring more inputs and raw materials, the new expansion plan bodes well for local sorghum producers in Cameroon. To produce some of its beverages, Guinness Cameroon sources sorghum from producers in the northern part of the country, under the Agricultural Investment and Market Development Project (Pidma). This World Bank-backed project aims to boost local production of cassava, maize, and sorghum to supply local agro-industrial units. It has already enabled producers gathered into cooperatives to "increase the selling price of their products by an average of 20%," according to official data. On this basis, the increase in purchases, following the increase in volumes of Guinness products, should further increase their income.

As a reminder, the Diageo group made official the sale of Guinness Cameroon to the Castel group on July 14, 2022. The deal is the 12th of its kind between the two partners in the African brewery market. It is expected to further strengthen competition in the Cameroonian brewing market, especially after billionaire Samuel Foyou’s Brasaf official launched its first beer last June 30.

June 30 also corresponds to the official end in Cameroon and several other African countries of the partnership between the Castel Group and The Coca-Cola Company. The American group has now chosen the Cameroonian economic operator Jacqueline Ndogmo, promoter of Gracedom Invest, to produce and distribute its products (Coca-Cola, Fanta, Schweppes, and Sprite) in the country.