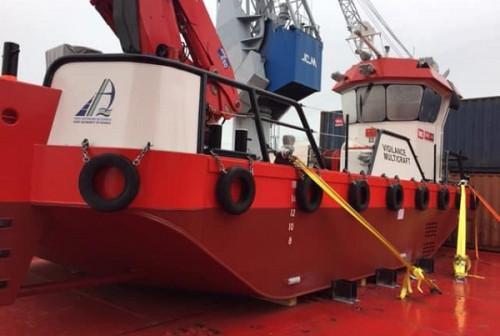 “(Business in Cameroon) - The Beaver 50 suction dredger baptized vigilance which would be used to maintain water bodies and feet of wharves has arrived in Douala.” This was announced by Douala autonomous port in a release published on July 21, 2019.

According to the port’s authorites, the multifunctional dredger will be complemented with a mower deflector and various equipment that should be delivered today July 22, 2019. This will also be complemented by the “stationary hopper dredger TSHD 3000 being constructed in the workshop of Dutch company IHC, leading manufacturer of such vessels,” the authorities indicate.

The TSHD 3000 (3,000 m3) should be delivered by the end of this year, according to authorities. They added that the "Chantal Biya" dredger, which is being renovated by the port’s technicians, will be added to this watercraft.

For three years now, the port’s management has been equiping the port with dredger devices. The goal is to save on high dredging costs that have been greatly affecting the company’s financial performances. From 1997 to 2018, XAF141.85 billion was used for dredging purposes, the port reveals. This means that an average of XAF6 billion is spent yearly by the port for that purpose.