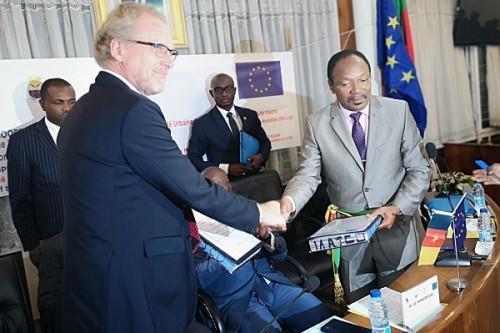 According to the European Union delegation, during his stay, Hans-Peter Schadek signed a grant agreement to support the urban communities of Yaoundé and Douala, which are in partnership with the city of Bordeaux in France, for the implementation of the “Sustainable Urban Mobility Plans.” The aim of these plans, supported by the European Union with a tune of XAF2.7 billion, is to improve local governance in the field of urban mobility particularly.

The European Union supports these plans via the creation of a governing body for the transport sector, an urban mobility observatory and an urban planning agency in the two cities ( Yaoundé and Douala). In the framework of these plans, the creation of a mass urban transport system in the form of a cross with a North-South and an East-West axis as the main public transport axes was suggested. The construction of feeder roads, penetrators and a series of roads are also planned in the framework of the “Sustainable Urban Mobility Plans.”