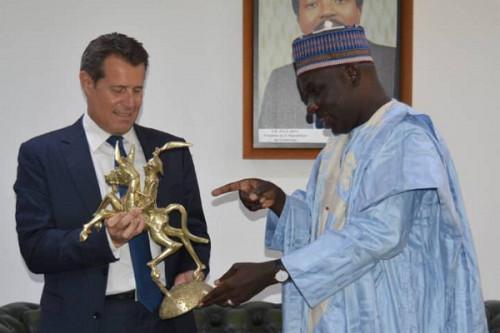 (Business in Cameroon) - On November 19, in Yaoundé, Minister of Economy (Minepat) Alamine Ousmane Mey granted an audience to the Swiss Ambassador to Cameroon Pietro Lazzeri. During the audience, the latter (who was at the end of his stay in Cameroon) and the Minepat discussed the socio-economic collaboration programs between the two countries. The programs included the double taxation agreement process the two countries formally initiated about two years ago. The process was initiated because, without the agreement, companies operating in Cameroon and Switzerland have to pay taxes in both countries.

"I think it is appropriate to mention that to bring the two countries’ private sectors together, we will ensure the double taxation agreement is signed as soon as possible to encourage investors to invest more resources in a country that has so much potential,” said Alamine Ousmane.

The double taxation agreement process started on June 4, 2018. That day, Cameroon’s Minister of Finance Louis Paul Motaze was granted an audience, in Berne, by Federal Councillor Ueli Maurer for a working visit. According to the Swiss federal department of finance, the two officials discussed financial and fiscal issues.

On July 22, 2019, in Yaoundé, Louis Paul Motaze and Pietro Lazerri co-presided the 2nd round of the negotiations aimed at preventing double taxation and fraud and tax evasion. The negotiations were supposed to lead to the elaboration of a fiscal framework that would attract investments and encourage companies to operate in both countries. Once the double taxation agreement is reached, fiscal expenses will be reduced for companies operating in the two countries since they would no more have to pay taxes in one of the countries covered by the agreement if they pay taxes in the other.

However, experts and civil society organizations question Cameroon’s interest in such an agreement. The reason is that fewer Cameroonian companies operate in Switzerland. They are also worried about Switzerland being considered a tax haven.