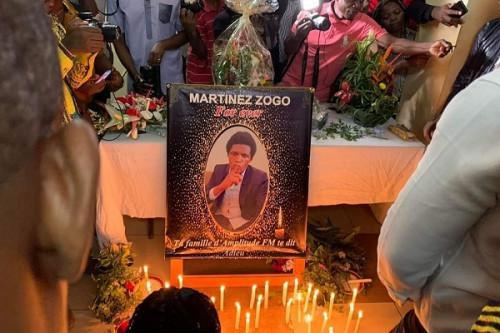 (Business in Cameroon) - The situation remains unclear for many as days go by. The dead body of the Cameroonian radio host Arsène Salomon Mbani Zogo, better known as Martinez Zogo, was found last January 22 in Ebogo III, a suburb of Yaoundé.

While everything seems to point to a murder, his peers from the Economic Press Association are calling for a thorough investigation to ensure that justice is done. Martinez Zogo was, "without a doubt, kidnapped, tortured and murdered in the most barbaric way," the President of the Association, François Bambou, wrote in a statement issued on January 23, 2023.

"The Cameroon Economic Press is worried about the deterioration of the security conditions of media actors, several of whom have repeatedly received threats, including death, or suffered reprisals of various kinds. Press Eco, in solidarity with actions aimed at promoting and defending the freedom of expression in our country, urges the government to find and bring before the courts for exemplary punishment, the perpetrators of this barbaric crime,” he added.

Martinez Zogo became a famous host thanks to his show "embouteillages", which has been airing since 2007 on an urban radio. He has always denounced the wrongdoings within the public administration. Recently, a few days before he was murdered, he strongly criticized the disbursement of several tens of billions of CFA francs by the Treasury to Jean Pierre Amougou Belinga, a businessman and media owner known to be very close to the government. He also said he had files on Ivo, which he will expose “in a few days”. General Ivo Desancio Yenwo is the director of presidential security. This service has awarded several contracts to the businessman's companies, paid from budget chapters 65 and 94, which are currently being audited.

According to various sources, after meeting with one of his informants during the day, Martinez Zogo was abducted on the evening of January 17, 2023, in front of the gendarmerie station of Nkol-Nkondi, in a suburb of Yaoundé, by unidentified hooded men. His cries for help to the gendarmes of the brigade, while he was being chased by his kidnappers driving a black Toyota Prado, were in vain. His lifeless body was discovered five days later by residents in Ebogo III. The body was taken to the morgue of the Yaoundé Central Hospital. The autopsy carried out later revealed that the body had been subjected to many abuses, including mutilation.

Following the tragedy, René Emmanuel Sadi, the Minister of Communication, issued a statement reassuring everyone that "Cameroon is a state governed by the rule of law, where freedoms are guaranteed, including press freedoms, and where no one can and should take the place of the competent jurisdictions to take justice into their own hands”. This member recalled that "active research continues as part of the investigation opened to find and bring to justice the perpetrators of this heinous crime”.

On January 23, 2023, media men went with flowers and candles to the headquarters of the radio station Amplitude FM, which was run by the deceased, to pay tribute to him. This was in response to an invitation made the day before by Haman Mana, owner of the daily newspaper Le Jour and president of the Federation of Press Editors of Cameroon (Fedipresse).