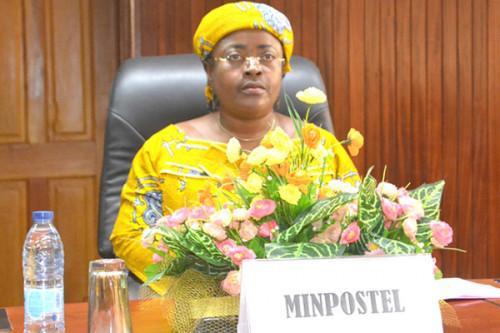 (Business in Cameroon) - On November 23, 2020, in Yaoundé, (at the opening of the 23rd, 24th, and 25th ordinary sessions of the Inter-ministerial Committee for the Assignment of Frequency Bands-CIABAF), the Minister of Telecommunications, Minette Libom Li Likeng (photo) presented an overview of the sector on the sidelines of the CAF African Nations Championship (CHAN) Cameroon will organize in early 2021.

According to the official (who is also president of CIABAF), the task force in charge of the use of FM broadcast band in Cameroon has highlighted various irregularities in the use of the frequencies that are close to the aeronautical band. She added that the irregularities were mainly noticed in Yaoundé and Douala and often performed by broadcasting operators who very often just have temporary authorizations issued by the Ministry of Communication.

She explained that such use of FM broadcast bands seriously threatens the safety of air navigation and are against the laws that confer on the Telecommunications Regulatory Agency (ART) the mission of assigning and controlling the use of the frequency spectrum of different radio communication services, including broadcasting services. The said laws are namely those governing electronic communications and audiovisual activities.

Minette Libom Li Likeng then indicated that the successful organization of a sporting event such as CHAN is highly dependent not only on the availability of frequency resources for the proper functioning of electronic communications networks but also on the use of these resources in accordance with technical standards and regulations.

She then prescribed an assessment of  CIABAF’s activities to possibly elaborate new guidelines for better and lawful use of frequencies in the country.