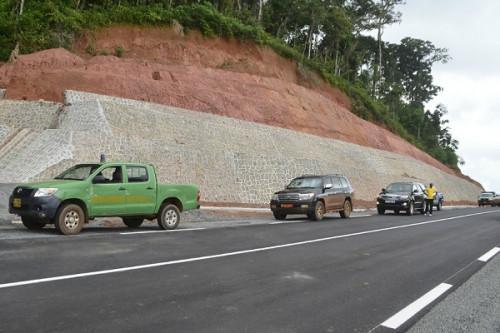 (Business in Cameroon) - The Cameroonian Ministry of Public Works (Mintp) informs that today January 26, 2021, it will proceed to the provisional acceptance of 150 kilometers of road linking Cameroon to Congo-Brazzaville in the framework of the CEMAC integration projects.

The roads concerned include two lots of the Sangmelima-Ouesso road (700 km) completed in South Cameroon. These are Mintom-Lélé (67.50 km),  Lélé-Ntam-Mbalam (53 km) and the 30-km Ntam-Mbalam junction stretch. "The provisional acceptance is carried out through a step-by-step inspection of the works, in the presence of representatives of the project owner, the contracting authority, the financial backers, the company, and the control mission. It is a meticulous task that assesses the technical quality of the works. It will be presided over by the Director-General of Infrastructure Works," the Mintp states.

According to the African Development Bank (AfDB), which is the main financial backer of this inter-capital road project, besides developing trade between the two countries, the roads will strengthen regional integration in Central Africa by allowing interconnection on roads linking Cameroon, Congo, DR Congo, Gabon, Equatorial Guinea and Central Africa.

The direct beneficiaries of the project are transport users as well as the people living in its area of influence (Sangha Department in northern Congo and the southern region of Cameroon). The project is expected not only to improve the movement of people and goods between the two countries but also to open up areas with high economic potential.