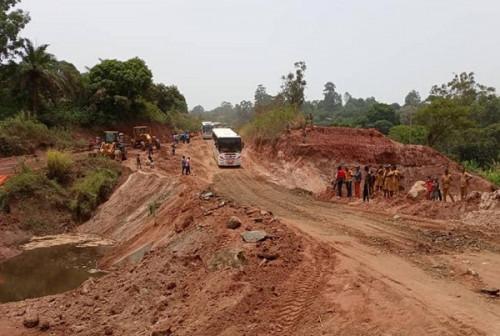 (Business in Cameroon) - Minister of Public Works (MINTP), Emmanuel Nganou Djoumessi, recently announced the resumption of traffic on the 59.9-km Babadjou-Bamenda road section of the Yaoundé-Enugu corridor leading to Nigeria. Indeed, traffic on that axis was disrupted because of two highway embankments that collapsed after the heavy rains on the night of March 24-25, 2021.

The construction of that section started in 2017 but, on January 14, 2021, it was stopped following an attack of armed secessionists from the North-West. " Sogea Satom, the contractor for the construction project that started in 2017,  notified of its withdrawal from the project justifying its decision by a case of force majeure caused by the security situation in the area. This notice paved the way to the cancellation of the contract [the construction contract between Sogea Satom and the project owner]," the MINTP explained.

The official added that based on control missions’ reports and to avoid traffic disruption, local companies were mobilized to carry out some works that will allow the circulation of people and goods, pending the selection of a new contractor for the project.

Two local companies were mobilized for that purpose. The first was entrusted the works on the Babadjou side while the second was posted at the Santa side (Bamenda). In Babadjou, the traffic was restored but the company in charge of the works is still carrying out additional works to avoid another collapse of the embankments.

Meanwhile, on the Bamenda side, traffic is restored but users have to comply with measures effective for dirt roads or stop using the axis for two hours after rains.  The reconstruction of the Babadjou-Bamenda road section was launched in 2017, thanks to a $192 million (XAF113 billion) support from the World Bank.  The project was initiated to stop accidents and reduce transport costs and duration on the Yaoundé-Enugu corridor that connects to East Nigeria passing through Bafoussam and Bamenda, whose economy mainly relies on agriculture and commerce.