Cameroon : CCC in pole position to replace Wietc/Crcc14 for the renovation of East entrance of Douala 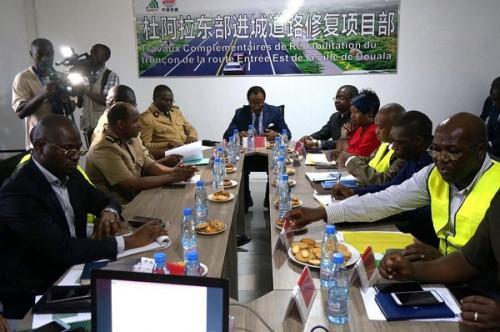 (Business in Cameroon) - On August 20, 2019, Emmanuel Nganou Djoumessi, Cameroon’s minister of public works requested an authorization from his peer of the public procurements to enter into an over-the-counter agreement with Corporation commerciale canadienne (CCC) for the 2nd phase of the renovation of the east entrance to Douala.

The minister of public works explained that the technical and financial challenges faced by the Chinese group Wietc/Crcc14 which was in charge of the works, force the ministry to initiate the termination of the group's contract.

He explains that unlike the Chinese group, CCC has proved technical and financial capacities to support the government in the realisation of this important infrastructure. CCC "proved its worth during the renovation works at stade de la Réunification in Douala and will surely help achieve the urgent interim goals, traffic and road safety maintenance as well as the opening of at least four roads [ed.note : out of the planned six] in preparation for the 2020 African Nations Championship," he explained. He also indicated that the Canadian company’s offer was expected by August 26, 2019. This offer will be reviewed by a sub-committee set-up by the ministry of public works.

On August 21, 2019, the ministry of public works and Chinese group Wietc/Crcc14 met for discussions in the framework of the termination of the group’s contract.

During the meeting, the head of the infrastructure works at the ministry informed, an agreement was reached for a non-contentious termination of the contract in regards to the requirements of the 2020 African Nations Championship and the AFCON2021 Cameroon should host. Indeed, because of those two events, part of the works should be delivered by December 15, 2019.

For the breach of contract, the offer to Wietc/Crcc14 was the payment of works realized till the joint review of the works, the release of its deposit, the buyback of some prefabricated elements that are already available on spot. It was also required to pay a late penalty. In addition, the modalities for the payment of the company’s demobilization charges are to be reviewed. The Chinese party accepted the offer but asked for the payment of filing fees.

The 2nd phase of the renovation of the East entrance to Douala was awarded to Wietc/Crcc14 at XAF33.14 billion. It includes the development of 21 kilometres of roadway (expansion of roadways PK10+200 to PK19+200). There is also the construction of five roundabouts to facilitate access to Japoma sports complex. The street lighting and street furniture are also included in the contract.

In the past few weeks, instead of facilitating circulation on the highly important Douala-Bangui-Ndjamena corridor, the works created huge jams. Indeed, it would take at least four hours for a user to complete the 9 kilometres of this east entrance. Such situation angered the government because by-pass roads had not been planned in the works.