Young, managers, inventive and competent, they are the pride of Cameroon (5th and last part) 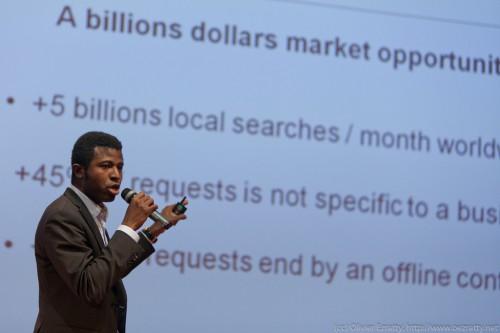 (Business in Cameroon) - Through their accomplishments, they contribute to raising high the tricolour flag of their countries at the global exchange meeting. These flag-bearers for Cameroon are the hope of a country with potentialities to be yet exploited, but whose future could hide many surprises for the most sceptical.

He is only 33 years old. He is part of the first class graduating from the Institut Universitaire des Techologies (IUT) Fotso Victor of Bandjoun, Western Cameroon, where he received a DUT in Telecom and Network Engineering before continuing his studies at the Université de Paris XIII in France, from 2002. Today, he is the CEO of I-Dispo, a start-up launched in 2010, which offers concierge service and has a new generation of personal assistant called “Sara”.

This project was put in place after this Cameroonian telecommunication specialist did a 4-month internship at the Founder Institute, located in Silicon Valley in the USA. He had then just been designated winner of the Strategy National Award in France. In 2011, his start-up was chosen as offering “the most innovative service of the year”, during the “Grand Prix de l’Innovation de Paris” organised by the Paris town council.

A former Microsoft and British Telecom employee, Ismaël Nzouéton (photo), who is on the subsidiary list of “African Leaders of tomorrow”, is nowadays devoting his time entirely to his start-up which has representations in Europe, Africa and the USA. Through its innovation and efficiency, I-Dispo today has in its portfolio clients such as Microsoft, Renault, SFR, Avril, Orange, MTN and Airtel. Since 2012, I-Dispo has opened a subsidiary in Cameroon

A Herculean task, massive costs. The construction of the West African railroad loop can only be described through superlatives. Not unusual for a project on which Bolloré group will invest approximately FCfa 1,650 billion over the next 10 years. At the centre of this 2,700 km-long railroad infrastructure linking 5 West African countries (Côte d’Ivoire, Togo, Burkina Faso, Niger and Benin), is a Cameroonian civil engineer. His name: Joseph Jean Aouda.

Since June 2014, while Director of fixed installations at Bolloré Africa Logistics Cameroun (BAL), he was appointed “Manager of rail works as part of the construction of the West African railroad”. On the different sites of this railroad named “Blue Line”, this graduate of the Ecole Nationale Supérieure des Travaux Publics (ENSTP) and holding an MBA from the France Business School, is coordinating teams of over 1,000 people on a daily basis.

Christian Ngan: king of cosmetics made in Africa

Born in 1983, Christian Ngan is an industrialist and a financier. He is the CEO of the Madlyn Cazalis Group, a company designing and producing natural beauty products made from African raw materials. Madlyn Cazalis Group operates in Central Africa with over 50 distributors (pharmacies, beauty institutes and stores). He also owns Goldsky Partners, a subsidiary of Madlyn Cazalis specialised in strategic and financial support for African companies.

Before launching his own group which is also active in real estate, Christian Ngan first worked for Société Générale, then as Investment Director at Findercod, an Parisian investment bank which he joined after his studies at Panthéon Assa, then Panthéon Sorbonne.

In 2014 and 2015, this young Cameroonian businessman was chosen by the American magazine Forbes, as one of the 30 young most promising entrepreneurs in Africa. Since 2014, he has been featured in the subsidiary list of the Choiseul African Leaders of the future. Recently designated Young Business Leader of the Year in Western Africa, Christian Ngan is also among the top 35 young businessmen under 35 for 2014, a ranking established by Young People in International Affairs (YPIA).

“I have been asked what I would say to Bill Gates if I met him. I replied that I will make him taste our “bean doughnut” to know his opinion of it”, Idriss Nguepnang confided to Le Monde Afrique. After working in France, Germany and Switzerland, this Cameroonian of 38 years went back to his country and decided to launch Tchop et Yamo (eat and enjoy in local slang, Editor’s note) in June 2011.

This is a fast food chain with restaurants in Douala and Yaoundé, the two main cities in Cameroon. In these restaurants, the main menu is the beignets-haricots-bouillie (BHB – doughnut made from boiled beans), a very popular local recipe that the Thop et Yamo shops have taken from the streets of the big cities and villages and transplanted to modern, well decorated settings with free Wi-Fi connection.

Since the opening of these restaurants, the idea has been very well received, to the point that the promoter is now dreaming of quick expansion. Indeed, Idriss Nguepnang has the ambition of opening a new location every quarter, over a period of 8 years. Which would in total give him 32 restaurants, with each employing 20 people.

A quick calculation and this means that, the expansion programme of Tchop et Yamo should general over 500 jobs during the next decade, against 70 employees currently. To make this dream a reality, the promoter of the Cameroonian McDonald’s is negotiating opening his capital to the Société Africaine de Participation (SAPA), a investment company owned by the Cameroonian banking group Afriland First Bank.

The oldest of the Nkontchou siblings, which has 4 financiers including his sister Mireille, Alain Nkontchou was the one who passed the finance bug to his brothers William and Cyrille. With a strong experience gained over many years in the London financial world, Alain Nkontchou has been since June 2015 part of the Board of Ecobank Transnational Incorporated (ETI), the parent company of the Pan African banking group Ecobank.

At 51 years, Managing Director of Enko Capital Management LLP, an asset management company focusing on investment opportunities in Africa, headquartered in London and Johannesburg and co-founded with his Cyrille Nkontchou. Ex-Managing Director of Macro Global Trading Group at Crédit Suisse, in London, Alain Nkontchou is among the first African to have gone into the capital markets in London in the 80’s.

This financier who is the 2nd Cameroonian to sit on the Board of ETI after the famous André Siaka, studied electronic engineering (Université de Paris VI, Supélec and Ecole Supérieure de Commerce de Paris), finance and accounting. He was General Manager at JP Morgan and Chase & Co, still in London. He was at the time only 30 years old.