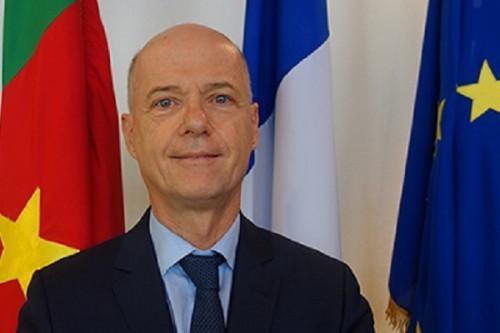 (Business in Cameroon) - French companies have lost 30% of their market shares in Cameroon over the past 30 years, according to the French ambassador to Cameroon Christophe Guilhou (photo). The diplomat presented the estimate on June 24, 2021, during his address to students of the International Relations Institute of Cameroon  (IRIC) in the framework of the Diplomatic Forum organized by the IRIC.

“The market share controlled by French companies in Cameroon has dropped from 40% in the 1990s to 10% nowadays,” the diplomat stated.

A recent example that illustrates how French companies are gradually losing ground in Cameroon is the withdrawal of the French‐Danish consortium Bolloré-Maerskʼs concession on the container terminal of the port of Douala, which was one of the largest controlled by Bollore group in the Gulf of Guinea. Although the case is still pending before national and international courts, this concession loss sustained by the Bollore group weakened the French group in Cameroon, authorized sources believe.

For several analysts of the Cameroonian economic space, the market shares being lost by French companies in the country are caused by China’s growing influence.

“Between 2000 and 2014, Cameroon captured XAF2,750 billion of foreign direct investments; XAF1850 billion or 67% of the overall foreign direct investments were from China (…) The remaining percentage came from countries like France, the USA, Nigeria, etc…,”  a report from the Presidency of the Republic indicates, citing figures from the United Nations Conference for Trade and Development (UNCTAD).

Since the 2000s, China has been taking almost all of the infrastructure deals in Cameroon. In 2012, Chinese companies’ presence in infrastructure projects in Cameroon shot up when the country launched the first phase of its structuring projects (bridges, roads, dams, etc.).

Helped by Eximbank China, one of the three Chinese institutional banks chartered to implement state policies, Chinese companies are almost always in the starting block, since with every project loan granted by the bank, there is always the name of a Chinese firm that will carry out the project. Those firms are notably CCCC, CWE, CHEC, and Sinohydro in the infrastructure sector, with Huawei and ZTE in the telecommunication industry.

The influence of Chinese firms in the Cameroonian economy is growing to such an extent that in a bid to secure the concession on the container terminal at the Kribi deep seaport, French groups Bollore and CMA CGM had to form a consortium with Chinese firm CHEC, which won the contract to build the deep seaport.

On the other hand, French firms’ influence is dropping. Even in the construction of infrastructures in the framework of the AFCON2021 to be hosted by Cameroon in January–February 2022, they have almost no contracts. Instead, Italian, Turkish, and Canadian firms are the most present.

Even when it comes to commercial exchanges, the situation is the same. In 2018, China was Cameroon’s main client by being the destination of 23.9% of the country’s exports, according to data published by the National Institute of Statistics (INS). France was the fourth (6.3% of Cameroonian exports) behind Italy (14.7%) and the Netherlands (6.4%). That same year, China was also the main supplier of products imported by Cameroon. It supplied 18.5% of Cameroon’s exports, while France supplied just 8.3% against 5.6% for Nigeria and 4.8% for the Netherlands.