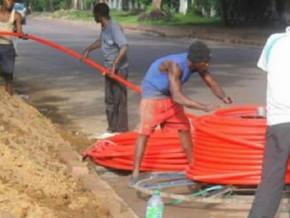 (Business in Cameroon) - The Cameroonian government announced it has launched feasibility studies to restore 1,500 km of fiber optics in three regions, the Northwest, Southwest, and Far North, where insecurity has been on the rise in recent years.

The ongoing Anglophone crisis, coupled with attacks by Boko Haram, has destroyed many infrastructures. In addition to facilitating access to telecom services, the announced reconstruction of the fiber optic network in these three regions should help reduce the "fiber gap" in Cameroon. According to the IFC, the World Bank's private sector financing arm, this term, which refers to areas where fiber optics have not yet been deployed or used, still affected about 14 million people in Cameroon in 2020 or more than half of the country's estimated population (25 million).