Cameroon: Minister of Transport takes part in the test drive of the Yaoundé-Douala trains that will soon be relaunched 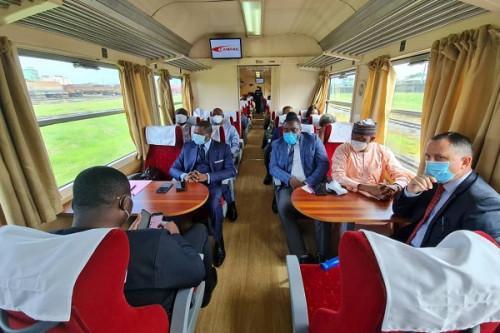 (Business in Cameroon) - On April 29, 2021, Minister of Transport Jean Ernest Ngallé Bibéhé Massena, was at CAMRAIL’s headquarters in Douala. This visit aimed to check the eleven passenger cars rehabilitated in preparation for the resumption of the Yaoundé-Douala intercity trains that were suspended after the Eséka railway disaster in October 2016.

Besides the eleven passenger cars (rehabilitated at XAF1 billion), the official also inspected four locomotives acquired by Cameroon and took part in a test drive between the two Cameroonian capitals. This test drive means that the inter-city trains will resume soon. However, the duration of the Yaoundé-Douala trip will no longer be 3 hours and a half as it used to be. It will rather last four hours and 45 minutes.

This over one hour increase in the duration is due to the four stops newly created along the route, we learn. According to the delegation that followed the Minister of Transport for the test drive, there are now stops at the Edea, Eséka, Makak, and Ngoumou stations.

Besides the stops, the current state of the rail network will probably contribute to the increase of the travel duration. Indeed, at the end of the 35th session of the Interministerial Committee on Railways Infrastructure (COMIFER), Pascal Miny (CAMRAIL’s CEO) explained that because of the landslides, some parts of the rail network have been reinforced. So, the trains would move carefully along the route. Hence the additional duration.

The resumption of this express train will substantially increase the transport offer between Yaoundé and Douala (the two most important cities in Cameroon), in so far as trains are mass transport means.